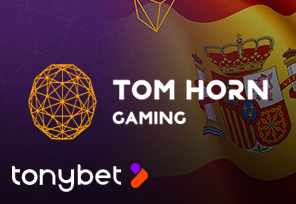 Tom Horn Gaming is one of the most famous and fastest-growing casino software developers who aim to secure a leading position among brands in the iGaming industry.

For this to be possible, the company must constantly work on expanding its business roots. The developer made one such step just recently when it shook hands with the popular, ComeOn Group. On this occasion, the developer expanded its presence in Europe.

Namely, the company recently obtained the necessary certificates for its terrific titles, and thanks to that approval, this fantastic content will now be available in Spain via SOFTSWISS!

From now on, players from this country will have an exclusive opportunity to join their favorite form of entertainment with Tom Horn’s interesting, feature-packed and innovative titles that will surprise you with their dynamic gameplay and unique theme. These products will be available via online TonyBet thanks to the deal with SoftSwiss.

As announced between these two giants, the distribution will include several the most popular titles, including fan–favorites 81 Frutas Grandes, 243 Crystal Fruits, and The Secret of Ba as well as much more.

Ondrej Lapides, CEO at Tom Horn, said: ”Spain is a market with a lot of potential and we’re eager to exploit these opportunities together with TonyBet. We’re excited to see how our titles are received by Spanish players and we’re confident that we have all the right products and tools to build a long-lasting business relationship with our partners in Spain.”

Davis Skulte, Key Account Manager at TonyBet added: “We always strive to deliver the best-in-class experience for our customers. Tom Horn Gaming fits this bill. Their expertise, attitude, and dedication to delivering highly engaging, innovative games localized for the Spanish market are on par with our own business philosophy. We are extremely positive that this will result in an effective partnership and mutual growth in Spain and beyond.”

Continuous Moves in the Right Direction

Tom Horn Gaming has taken several key steps since the beginning of the year as a part of a global expansion plan. It concluded several important agreements, including the one with the famous brand Interwetten.

Also, it announced that the company has been nominated for several prestigious competitions. These nominations include awarded nominations at the Baltic & Scandinavian Gaming Awards, EGR B2B Awards, and Game Developer Awards at the CasinoBeats Summit Malta.