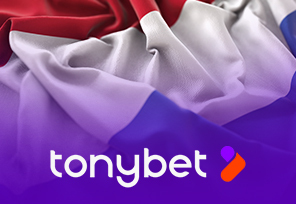 TonyBet, one of the leading and most prominent iGaming operators in the online gambling industry, announced that the company is ready to step into another fast-growing market and present its ever-growing offering to a new audience.

After a short break, TonyBet continued with its series of successes, and this latest major move was preceded by the step that marked September. Namely, this fantastic B2B brand joined forces with the well-established supplier of premium and engaging online casino content, iSoftBet.

TonyBet decidedly set out to win another recently regulated and fast-growing market after receiving important approval from the competent authorities!

The brand announced that it plans to launch its wide and engaging offering in the future on the Dutch market thanks to the fact that the brand has guaranteed a new license!

Namely, players from the Netherlands will have the opportunity to get involved in their favorite form of entertainment with plenty of engaging and feature-packed online casino releases that are proven to be one of the most popular among players around the world.

Titles from TonyBet’s games library will perfectly suit clients from this market because they have been developed to suit this market’s needs.

Next year, the products will be available on tonybet.nl.

Jesse Pas, Country Manager of TonyBet in the Netherlands gave a comment regarding the new move and stated: ”Adding the Dutch gambling license to our growing portfolio of local licenses was an important objective and we are very proud to have achieved it. Although the competition is very high, but still young in the Netherlands, we are sure that there is room for a strong local player with a distinctive approach. We want to accomplish this by not putting the focal point on the product, but also on what our brand can add to the total gambling experience, online and offline. For now, all focus is on building a team in the Netherlands and ensuring a successful launch next year.”

Victor Troitsin, CEO of TonyBet Group also had a few words to say and added: ”TonyBet’s development is focused on Canada, Spain, Portugal, UK, and the Baltic States. We are very excited to enter the promising Dutch market. We are committed to providing players in the Netherlands with safe, secure, innovative, and exciting online gaming. We will adopt and implement our 12 years of international experience and best practices.’’

‘’TonyBet expands and preparing to launch in the Netherlands next year’’, europeangaming, 29. November 2022.

The post TonyBet is Approved by the Dutch Gaming Authority! first appeared on RealMoneyAction.com.