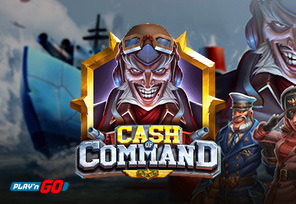 Play’n GO does not cease to amaze online casino players, launching one smash hit after another. Cash of Command, the newest slot made by the Swedish gaming giant invites them to get into a decisive naval battle to unlock the unique powers of true heroes and win up to an incredible 5,336x total bet!

Chock-full of sophisticated ships and submarines, the 9×9 grid tells an exciting story spiced up by unexpected twists and turns at every single spin.

Besides a captivating storyline, unique and well-thought-out characters, and superb visuals, fans of spinning adventures can enjoy a wide variety of bonus features able to generate epic prizes!

Soon after the launch of Aztec-themed Rotiki, Play’n GO stuns the online gambling community with Cash of Command, a 9×9 grid slot that takes players right in the middle of a decisive battle. To emerge victorious, they need to charge the meter with winning combinations and unlock the might of three naval heroes to defeat Baron Fusco.

Widely known for its strong focus on characters and narrative, the company has made every effort to create an interesting story, giving plenty of details to every character and literally bringing them to life. All commanders sit to the side of the grid and show up once a specific number of icons have appeared in winning clusters.

As already mentioned, the bravest of the brave can win up to a 5,336x total bet, which can be a whopping $533,600 for a maximum stake of $100. On the other hand, low rollers can enjoy this game starting from $0.10 a spin, so it’s safe to say, every level of player can enjoy this epic naval battle. Wins are achieved by hitting at least five matching symbols, as long as they are touching horizontally and/or vertically.

“Everything from the way the features play out on the grid to the visuals in the game, Cash of Command is a shining example of why Play’n GO games stand out in the industry.

“Our commitment to entertainment is in every ounce of what we create and that’s evident more than ever in this creative grid slot.”

Just as the majority of online slots from Play’n GO, including music-themed NSYNC Pop released at the very end of June, Cash of Command offers a decent set of bonus features packed with excitement and high winning potential. Ships and submarines added by the naval heroes will fire unique power-ups onto the grid to generate prizes that befit a true warrior.

The post Unlock the Might of Naval Heroes in Play’n GO’s New Slot Cash of Command first appeared on RealMoneyAction.com.