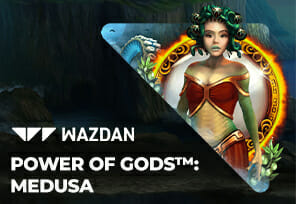 Wazdan, a well-known and recognizable provider of online slots, has launched its latest online release, specifically a new addition to its Hold the Jackpot series – Power of Gods

In this online title, you will embark on an adventure of exploring hidden jellyfish and in search of the mythical snake-haired Gorgon monster.

The grid is located between the rocks on the seashore and consists of 5 reels and 3 rows. It is decorated with low-paying symbols in the theme of cards (A, K, Q, J, and 10) but also with high-paying ones (King of the Sea Poseidon, young warrior Achilles, and beautiful young girl Athena with an owl standing next to her).

Volatility in this online slot is adjustable and the game also contains 10 fixed paylines. The theoretical Return to Player is 96.18%.

If you are a lucky, you can look forward to the help of Medusa to win up to x2500 the bet!

The Wild symbol appears in the form of the mythical snake-haired Gordon creature and during the game will help you create more winning combinations by replacing every symbol except the Bonus symbol.

Also, don’t be surprised if you see a Sticky Bonus symbol on the grid. It will stick to the reels to provide you with up to nine re-spins, but also increase the chance of activating the Hold the Jackpot bonus round.

The Hold the Jackpot Bonus Round will be activated if 6 Bonus symbols land on the grid and then the punter will be rewarded with 3 re-spins. Each time a new Bonus symbol appears on the grid, the number of re-spins will restart to 3. If you fill in all 15 fields with bonus symbols, a Grand Jackpot awaits you, worth 2,000x the bet.

Hades, also offers you the opportunity to win some other jackpots in this online release including Mini, Minor, and Major Jackpots.

We must note that you can select volatility level when you choose the Buy Feature.

Andrzej Hyla, Chief Commercial Officer at Wazdan, said: “We’re now back with the fourth installment in our electrifying mythology-inspired series, and Power of Gods

: Medusa could very well be the best yet. The game’s design is simply spectacular, with incredible attention to detail that makes it a feast for the eyes and a pleasure to play. With easy-to-understand game mechanics combined with huge win potential, we expect it to resonate strongly with our audience.”

“Wazdan enters the lair of the Gorgon in Power of Gods