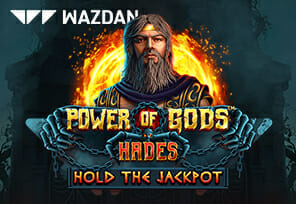 Wazdan, a respected supplier of casino games, has just introduced a new hit to its Hold the Jackpot collection, Power of Gods

: Hades. The slot includes 5 reels and 243 winning ways along with Cascading Reels for additional win potential. The story of the game is placed in the underworld, the realm of the lord of the dead, Hades. Power of Gods

: Hades is an exciting slot that wows all users who take an opportunity to spin the hot reels.

As part of the slot, players are invited to cross the Styx river and step into the underworld in the Hold the Jackpot bonus round. There are also Sticky Bonus symbols that enhance player engagement by sticking to the reels for 5 re-spins and enhancing players’ chances of triggering the bonus round.

What Else to Expect

Once you enter the Hold the Jackpot bonus round, you will see a 15-reel matrix covering the screen and players receiving three respins. The count resets for every additional Bonus symbol that appears, with multiple modifiers also available in the re-spins mode. Fire symbols deliver prizes between 1x to 10x, 12x, and 15x player’s wager, while hitting a Jackpot symbol provides players one of the three Jackpots. Blue Fire elements gather all values from Fire and Blue Fire symbols. Mystery symbols can transform into any Bonus symbol, whilst the new Hades Mystery element transforms only into Jackpots.

If all 15 reels are covered, the Grand Jackpot of 3,000x is delivered to players, along with all winnings gathered during the re-spins feature, up to a 5,000x player’s wager. This is the eighth Wazdan game to use the Hold the Jackpot mechanic, while also allowing players to select a Volatility Level

. There are also special features within the game, allowing gamblers to adjust the game according to personal preferences.

“The third creation in our thrilling mythological series, following Power of Gods

: Egypt and Power of Gods

: the Pantheon, is our darkest yet as we invite players to step into the underworld to face the might of Hades in search of untold riches.”

According to his words, Power of Gods

: Hades blends innovative Sticky Bonus elements and whopping Jackpots in the Hold the Jackpot bonus round for big win potential. They are delighted with this beautifully created title and thrilled to present it to players around the world.

“Wazdan opens the gates of the underworld with Power of Gods

The post Wazdan Takes Players to the Underworld in Power of Gods: Hades first appeared on RealMoneyAction.com.