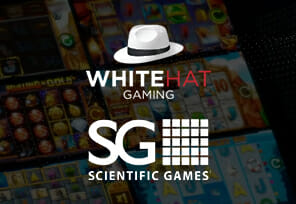 American players will now be able to enjoy all the pleasantries of a new collaboration between two popular software providers. Let’s find our more!

Very popular online slots such as Ted, Almighty Buffalo Megaways, and Eye of the Dead as well as iGaming content from Reel Time Gaming (RTG), Lucksome, and Merkur Gaming will be now available to casino operators via the Scientific Games ’OpenGaming aggregation platform.

An advanced jackpot system will be enabled through the platform as well, thanks to this agreement. The first states where the products will embark are Michigan, Connecticut, New Jersey, Pennsylvania, and West Virginia within the iGaming market, at the beginning of 2022.

For now, it is known that Scientific Games, which recently teamed up with Evolution, is the only company in the United States that will share the titles of White Hat Studios. As a new division of White Hat gaming, it is very important to note that White Hat gaming will offer an excerpt of its new catalog of games for the American market created by UK slot developer Blueprint Gaming – one of the largest European software developers. This will enable operators to use a wide range of content.

SG partnership director, Steve Mayes, commented: “As soon as we heard about the launch of White Hat Studios, we knew there was a huge opportunity for us to combine forces. This is a landmark deal for both parties and will provide our US operators with access to a fantastic suite of slots, table games, and jackpots. It’s a perfect synergy of content, scale, and innovation.”

About the Online Brands

Scientific GamesCorporation is located in Las Vegas, Nevada with a lottery headquarters in Georgia. Over the years, the company has introduced innovations and new technologies that have significantly contributed to breaking into the iGaming industry. According to data from 2018. the company has over 8,000 employees worldwide and also includes affiliates such as Bally Technologies and WMS Industries. For the territory of Great Britain, it has a special OpenBet platform for sports betting founded in 1996. based in Chiswick, London.

On the other hand, White Hat Gaming was established in 2012 and provides an efficient, stable, and easy account management solution within the iGaming industry for casinos and sports players including instant-win games, hundreds of slots, and RNG table games. Although a member of the Gambling & Casinos industry, it is privately owned with headquarters in Malta and the company consists of between 500 and 1000 employees.

The post White Hat Studios Products Now Available in the US through Scientific Games! first appeared on RealMoneyAction.com.