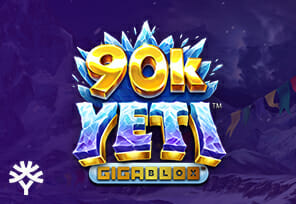 Legend says that the Yeti is a monster that lives in the Himalayas. It got its name from the Tibetan expression yeh-teh, and the inhabitants of the Himalayas described him as a divisive half-man. Yggdrasil, a world-famous casino software developer, and 4ThePlayer, explore this legend as they take us on a hike in the Himalayas in their new online slot where we will look for the Yeti and enjoy various win opportunities. Is he as scary as the rumors say?

The hike will start in some hidden part of the Himalayas where we will be greeted by an angry Yeti, a monster with white sharp hair and beautiful blue eyes. Due to the outside temperature, the edges of the grid are icy, and it is composed of 6 reels and 6 rows. Low-paying symbols are card-themed, and medium-paying ones are represented with climbing rope, ice ax, and a tent. The higher-paying symbols are 3 different mountaineers in yellow, white, and red jackets but our scary Yeti is the highest-paying symbol.

What Does This Title Bring Us? Let’s Explore Together!

This fantastic title brings you 46656 ways to win, and the maximum win will leave you breathless! Lucky players can get up to 90000X the stake!! Amazing! Punters are also given the opportunity to choose the bet, in a range between a minimum of 0.10 coins and a maximum bet of 10 coins.

The RTP of this game is high as 95.50%. The provider has also prepared many special features for us, which include a Wild Symbol, Gigablox, Yeti Reveal, Snowstorm, Giga Summon, Free Spins, and Bonus Buy.

A Wild can replace any symbol except scatter symbols; Yeti Reveal is activated randomly and then Yeti removes snow blocks from the grid and replaces them with paying symbols, thus increasing your chances of winning. The snowstorm will also randomly activate and shuffle the reels and thus create a win.

Free spins will be activated when 5 or more scatter symbols land on the reels.

Yggdrasil has delighted its players lately with several titles that have become a hit in a short time. Among them are Golden Fish Tank 2 Gigablox, Hypernova 10K Ways, Tiger Tiger Wild Life.

This provider has also announced the launch of new titles and some of them are Glory of Heroes, Serendipity, Lady Merlin