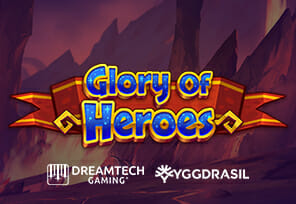 Yggdrasil, in partnership with Dreamtech Gaming, takes us to a distant land where valuable rewards await us in new slot, Glory of Heroes.

The grid is located on a meadow far from the castle where a battle between the soldiers and the purple dragon takes place. It consists of 7 reels and 7 rows, which is not uncommon when it comes to a slot that has a cluster pay feature. The symbols are presented in the form of gems in red, yellow, pink, orange, blue, green, royal blue, and purple in various shapes.

When Can We Encounter Special Features?

Special features we will encounter in this fight are the Boss Bonus, Free Spins, and Hero’s Powers.

On the left side of the grid, we can find the free-spins bonus meter. When it is charged, the player will be awarded 8, 10, 12, 15, 20, 25 or 50 free spins. The number of free spins depends only on your luck at a given moment because the number will be randomly chosen.

Stuart McCarthy, Head of Product and Programs at Yggdrasil, said: “Our partnership with Dreamtech Gaming continues to go from strength to strength and we’re thrilled to be releasing Glory of Heroes. With its video-game style level progression, huge win potential, and innovative cluster pay mechanic, we are certain it will become hit across our network.”

Some of the titles launched by this provider in addition to this are 90k Yeti Gigablox, Golden FishTank 2 GigaBlox, Hypernova 10K Ways, Savanna Roar, and Tiger Tiger.

Also, Yggdrasil recently expanded its network to North America by signing a partnership with IGT.