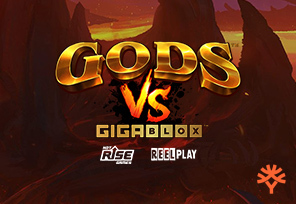 Yggdrasil, a well-established iGaming content developer, has joined forces with its long-term partner, ReelPlay, several times so far to present fresh and innovative content to its clients!

As a result of these collaborations, there have been plenty of amazing releases including the most recent one, Arctic Sorcerer Gigablox.

However, the companies are ready to deliver another hit title! So, let’s find out together what they have prepared for us this time!

Are you ready to explore the world of Gods and collect valuable rewards? Well, if your answer is yes, then you are in the right place!

Yggdrasil and ReelPlay present Gods VS Gigablox, the latest online casino release in the iGaming industry.

This fantastic game will offer you more than you expect! In addition to well-designed symbols, players will be able to benefit from big wins, engaging features, but also interesting gameplay and theme.

Gods VS Gigablox is a 6×6 online game that features 50 paylines. The volatility is high, and the Return to Player is average and amounts to 96%.

Spin the reels and get a chance to win up to an incredible x10,225 the stake!

What is very interesting is that this world is cosmopolitan and accepts all important beings of the world! Namely, in addition to card-themed symbols, players will also get to know Kitsune, the Greek god of war Ares, the Chinese monkey king Sun Wukong, the Egyptian God Anubis, the Greek Medusa, and the God from Norse mythology, Thor.

Gigablox Symbols in sizes 2X2, 3X3, 4X4, 5X5, and 6X6 can also appear on the grid in the spins. During the base game, both low-paying and high-paying symbols can appear in the form of Gigablox symbols, while during the Bonus Spins and Battle Feature only Gods can be giants.

Let’s Not Forget the Bonus!

If you want to trigger the Bonus Spins feature, you can do so by landing 5 scatter symbols. You will be welcomed with 8 bonus spins.

Players can also take advantage of Versus symbols, Versus Battle feature as well as Bonus Buy options.

Stuart McCarthy, Head of Product & Programs at Yggdrasil, said: “We were blown away with the reception to Monsters VS GigaBlox not too long ago and it only felt natural to return to the series with a bigger and bolder game, Gods VS GigaBlox. We fully expect this release to emulate the success of its predecessor thanks to its wonderful features and lucrative GigaBlox GEM we know players adore.”

David Johnson, CEO at ReelPlay, said: “It’s incredibly rewarding for ReelPlay to enable independent studios like Hot Rise Games to release top slots such as Gods VS GigaBlox. With an infinitely re-playable bonus game, Gods VS GigaBlox is the fruit of a winning collaboration combining Hot Rise design, ReelPlay technology, and delivered to market under the YG Masters framework by Yggdrasil.”