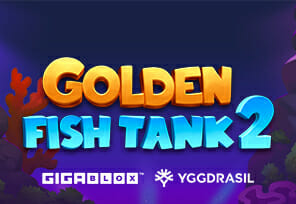 Yggdrasil has officially debuted its latest slot title, Golden Fish Tank 2 GigaBlox. The grid is made up of 6 reels and 4 – 6 rows and is located at the bottom of an aquarium. Oxygen balls move the corals in the background, and everything is accompanied by light music.

During each spin, two adjacent reels will be covered with two Gigablox symbols. These Gigablox symbols can be increased to 6×6 in Free Spins mode when the reels also expand. Low-paying symbols will be in card ranks while high-paying ones represent 4 different types of fish.

The Wild symbol appears during the game and can replace any symbol, but it also has its own value that pays off. We also encounter the free spin symbol which only appears in the base game.

This slot can bring you a maximum win of x5000 your stake, and you can choose the bet within the limits set by the provider and they are: Minimum bet of 0.01 coin and maximum 100 coins (Great for high-rollers).

Paylines in this title vary between 25 and 40. Return to Player is as high as 96%, which is average, followed by medium-high volatility.

The special features in this game include Golden Bet, Treasure Chests, Bonus Buy, and Free Spins which are triggered when 5 or more scatter symbols appear on the grid.

If you hate waiting for free spins you can buy them by yourself for 60x your stake and enjoy between 5 and 16 free spins.

Yggdrasil is one of the popular software developers and surprises its players regularly with new content!

Its latest title was preceded by big hits such as Hypernova 10K Ways, Savanna Roar, Tiger Tiger Wild Life, Hunters Moon Gigablox, Winfall in Paradise and Vikings Go Berzerk Reloaded as well as many others.

However, this provider does not intend to stop here, so it has already announced the dates of the new titles on the official website: 90K Yeti Gigablox (November 1), Glory of Heroes (November 4), Serendipity (November 8), and later the same month Lady Merlin