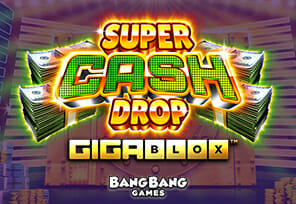 Yggdrasil, a well-known casino software developer, in partnership with the fast-growing brand Bang Bang Games, has just launched its latest release. Namely, the company unveiled Super Cash Drop slot last year, which it has now upgraded with the Gigablox mechanic. So let’s take a look together at what this fantastic title has to offer!

The grid is located in a luxurious environment and consists of 6 reels, 4 to 6 rows and up to 60 paylines. If you decide to discover which treasure this high volatility online release offers, you will be given the opportunity to win up to x5833 the stake! The theoretical Return to Player is a little lower than average and is 95.5%, but Gigablox mechanics will definitely make up for it!

The symbols that the punter will have the opportunity to meet in this online slot are low-paying ones that are card-themed (diamonds, clubs, spades and hearts), but also medium-paying ones a piggy bank and a filled wallet. The player will also be introduced to high-paying symbols – gold bars and a red dollar sign.

However, this fantastic online game features the Wild symbol as well as the Scatter!

Features That Will Delight You!

During each spin, the Gigablox feature will be active. This means that between 2 and 6 reels will connect, and the result will be a Gigablox reel!

This online slot also has a Super Reel Expand feature, which means that each time the grid setup increases, the number of paylines will increase – up to 60.

Super Stretch Wilds – Each time the Wild lands on a grid, it can expand to an entire row and carry with it a certain multiplier value.

If the Wild appears on the grid with an orange background, it will become locked. The punter will then be rewarded with a respin during which the Wild symbols will remain in place.

Stuart McCarthy, Head of Partner Programs at Yggdrasil, said: “Super Cash Drop was a fantastic addition to the YG Masters offering and we’re very pleased to work with Bang Bang Games again to enhance it with our hugely popular Gigablox

mechanic. Our GEMs offering allows for increased engagement through player mechanics and this is yet another example of them being used in an exciting fashion.”