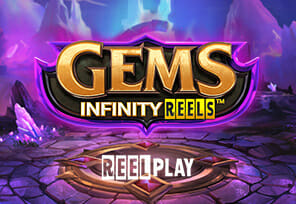 Yggdrasil, a top-tier publisher of online casino content, has teamed up with ReelPlay to present the latest intergalactic experience, Gems Infinity Reels

The matrix of the game includes two layers, with each of them having a 3×4 reel. While you are playing the game, it is possible to unlock up to four sets of reels– Ruby, Sapphire, Emerald, and Spinel and each of them is represented by a princess. Emerald and Spinel reels can be unlocked within the Bonus Spins.

If four Wild Princesses appear on the reels, they replace all symbols except Unity. The symbol multiplier is enhanced by 1x for every Wild Princess that embraces an entire reel. Any Unity element win triggers Bonus Spins in base play, leading to five Bonus Spins.

If a Wild Princess replaces a symbol of the same type, it duplicates the payout for that symbol combo. For every win, like all Infinity Reels

The title is powered by GATI, Yggdrasil’s one of a kind technology that allows partners to use the preconfigured and regulation-ready tools in order to deliver excellent content accompanied by swift distribution.

Commenting on the new title, Head of Product and Programs at Yggdrasil, Stuart McCarthy, said:

“Our YG Masters program continues to facilitate the creation of cutting-edge content, and Gems Infinity Reels

“We’re very pleased with our relationship with ReelPlay and look forward to seeing how the game is received across our network.”

puts forward a cosmic battle of the ages to the reels, as fearsome princesses duel in search of big wins. With immersive gameplay, unlimited multipliers, and the potential for a win of 888x on any spin, the company is excited to roll out another Infinity Reels

Details on the Brand

Yggdrasil Gaming is a top-tier provider of casino content, established in 2013. The company has become one of the most respected brands in the world which produces casino slots, table games, and bingo. The brand is also recognizable for a business suite – White Label Studios, YGS Masters, and Yggdrasil Dragon.