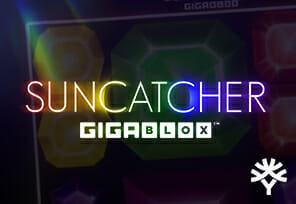 Yggdrasil Gaming, an online publisher for the iGaming industry, has just revealed Suncatcher GigaBlox, coming out with GEM mechanics and even more excitement.

The latest release from the provider comes with the GigaBlox

mechanic, featuring a huge symbol on each spin while also paying both ways across a 5×3 grid, with 10 paylines.

also includes a Wild Respins, with wilds extending to cover an entire reel and activate a respin feature. Wilds stay sticky during each additional spin and elements respin if a new expanding wild appears.

As soon as all 15 reel positions become filled with wild elements, the respin is triggered, with an additional win of 500x the stake.

The latest release from the brand also includes a Golden Bet feature which provides players with 3x the chance of hitting a wild symbol, costing 2x the stake.

is yet another title in Yggdrasil’s catalog to include the innovative mechanic, after Lucky Neko, Hades, and Gator Gold. Giglabox

is one of four GEMs provided by Yggdrasil and the same mechanics are also accessible to YG Masters partners.

Speaking on the new title, Head of Product and Programs at Yggdrasil, Stuart McCarthy, said:

. A low-volatility game for players who enjoy smooth gameplay, it’s an immersive journey through the stars in search of huge wilds and even bigger symbols.”

He added that the GEM offering has been popular since the original launch as well as other proprietary titles and they are excited about the introduction of YG Masters titles with their mechanics later this year.

Yggdrasil Gaming is a state-of-the-art provider of online gaming solutions for the market. Since its foundation in 2013, the company has emerged into one of the most respected and successful suppliers. Yggdrasil covers three product categories: Casino Slots, Table Games, and Bingo. It is also known for three business verticals: Yggdrasil White Label Studios, YGS Masters, and Yggdrasil Dragons. It is focused on delivering content based on creativity, quality, technology leadership, and innovation.

Yggdrasil is highly regarded for YG Masters which represents an innovative and collaborative partnership program. The program supports the world’s leading game studios, developers, and operators to create and distribute powerful content via the Yggdrasil network. All Masters clients get full access to Yggdrasil’s GATI