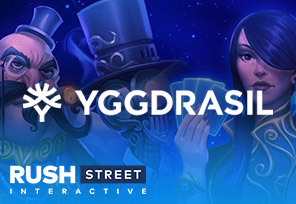 Yggdrasil continues to push the boundaries and extend its global reach by entering the LatAm market and taking its online slot portfolio live in Colombia with RushBet, a well-established brand of US iGaming giant Rush Street Interactive (RSI).

RSI was the first operator from the United States to enter the country widely known as the gateway to South America and launch both an online casino and sportsbook. From now on, the local gambling community will also have access to Yggdrasil’s award-winning slot content including games from the popular YG Masters program catalog.

Proud to Cater to Colombian Players

Yggdrasil, the world’s leading publisher of online gambling content who recently announced the appointment of Björn Krantz as the company’s new Chief Executive Officer, has made its highly anticipated debut in LatAm. Following the agreement with Rush Street Interactive, the brand’s thrilling collection of online slots enhanced with a range of innovative reel mechanics is now available to players in Colombia through the RushBet platform.

“RSI is a market leading operator in Colombia, and we are very proud to have been given the trust and confidence to introduce our best-in-class games to their local audience. We are excited about this opportunity and look forward to growing our presence in the region together with RSI.”

“Yggdrasil is well-known for its high-quality slots content and offers a diverse portfolio of fan-favourite and new games that is sure to impress our growing customer base in Colombia.

“We are excited to be the first to offer Yggdrasil’s impressive games portfolio in Colombia and look forward to a long term successful partnership.”

, and a host of other popular titles driven by ground-breaking reel engines. In addition to that, RushBet customers can test the winning potential of many all-time favorites including the Vikings Trilogy, and give a shot at thrilling games created in cooperation with other studios within the YG Masters program.

Rush Street Interactive is one of the fastest-growing iGaming companies in the thriving US market that has significantly expanded its reach over the past few months. In February, RSI added three more key markets in Ohio, Maryland, and Missouri thanks to an agreement with Penn National while in April, the Chicago-based company was among the first to enter Ontario.

“Yggdrasil makes LatAm debut with RushBet in Colombia”, yggdrasilgaming.com, May 11, 2022.

The post Yggdrasil Takes Its Slot Portfolio Live With RushBet In Colombia first appeared on RealMoneyAction.com.