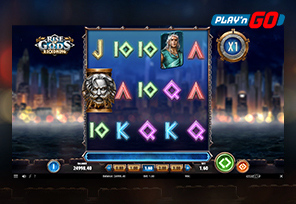 One of the most renowned casino software developers Play’n Go has replenished its striking portfolio of online slots with another Greek mythology-themed game, Rise of Gods: Reckoning. In the best traditions of Rise of Olympus, the latest tale about three divine brothers unleashes their powers of creating exciting wins of up to 5,000x bet with the help of stacked symbols and free spins boosted by multipliers.

In A Time Before Mount Olympus

Play’n Go who recently unveiled plans for conquering the North American market has launched the next edition in their popular Greek Mythology series that debuted in 2018 with the release of still popular today Rise of Olympus.

In the most recent story called Rise of Gods: Reckoning, Zeus, Poseidon, and Hades return as younger versions of themselves to spend some time amongst the mortals on Earth. The decision to leave Mount Olympus came after the three brothers defeated their merciless father Kronos and imprisoned him in chains. The mighty fearsome titan, however, had different plans, so he broke free and rushed to Earth with his heart full of vengeance and fury.

‘We’re always looking for ways to push our characters to their full potential and origin stories are a great way to give characters more motive, but also immerses players further into the stories, adventures that these characters go on. The player gets to come along for the ride.’

Zeus, Poseidon, and Hades have been given not only a youthful look but also some unique superpowers intended to bring players hefty wins. This 5-reel 20-payline online slot is packed with rewarding bonus features able to generate plenty of excitement and truly impressive prizes of up to 5,000x stake.

Well, in Rise of Gods: Reckoning, this bonus is triggered by hitting three scattered icons – punters get 6 rounds on the house with the chance of retriggering the feature and being awarded 1, 3, or 6 additional spins for landing one, two, or three scatters respectively. The win multiplier that grows with fully stacked symbols appearing on the reel doesn’t reset during the free spins, unleashing the divine powers.

…is another advantageous feature that makes the gameplay of this video slot so much more fun. It can be triggered at random at any spin to synchronize high-paying symbols on two randomly selected reels. Needless to say, the synchronized reels increase the winning potential, beautifully complementing the game’s narrative and handsome characters.