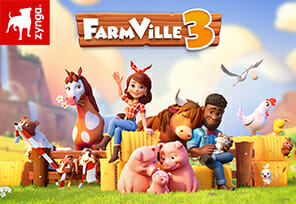 Zynga Inc., a global provider of interactive entertainment, has just announced FarmVille 3, a new edition of its FarmVille franchise. The social title is now officially available to players who can download it on iOS and Android devices as well as on the Mac M1.

The original version of the game appeared twelve years ago and has already recorded more than 700 million downloads since it was introduced in 2009. The new version of the game FarmVille 3 features a beautifully crafted globe with many animated characters and animals.

The main character of the slot is guide, Marie, who welcomes back the FarmVille community and new players as they create homesteads and accomplish challenges. She is followed by a fresh cast of farmhands with different backgrounds and skills who will support players with new elements in the title, including new customizable farms and animal husbandry.

As players enter into the new world, they can adopt, feed, and raise baby animals from 150 breeds and claim farm goods, wool, and butter, for their efforts.

More About Features of the Game

FarmVille 3 includes many different features such as:

Farmville 3 is the most recent addition to the Farmville series, which consists of Farmville 2: Country Escape and Farmville 2: Tropic Escape.

Speaking on the new launch, President of Publishing at Zynga, Bernard Kim expressed his opinion:

“FarmVille 3 immerses players in a visually stunning new FarmVille experience infused with the sense of adventure, social connection, and farming spirit that hundreds of millions of fans have come to love. We warmly invite a new generation of players to meet the delightful new FarmVille characters and lovable animals who thrive in a gorgeous countryside filled with heart and humor.”