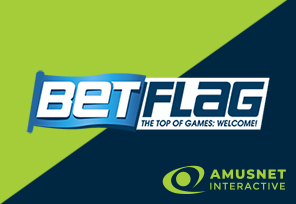 Amusnet Interactive, a Bulgarian-based provider of online casino games formerly known as EGT, has penned a content deal with BetFlag as part of the company’s long-term expansion strategy in Italy. The most recent agreement will see BetFlag, a leading sportsbook and casino operator in the country, offering its players an impressive assortment of high-quality titles, including universally popular classics such as Royal Secrets and Golden Coins and games from the Super Hot series.

Both sides see this partnership as the beginning of fruitful and successful cooperation and are resolved to make every effort to fulfill the expectations and reach their goals.

Soon after rolling out its rich gaming portfolio with iFortuna in the Czech Republic, Amusnet Interactive comes with more great news. The Sofia-based software provider of online slots and other casino games has just signed a content agreement with BetFlag, one of the largest operators in the Italian market.

Since its launch in 2012, BetFlag has been committed to providing the ultimate player experience, taking advantage of state-of-the-art technologies and offering the best customer service. To exceed the expectation of even the most demanding punters, the operator is constantly looking for new opportunities to enrich and diversify its gaming library, therefore the partnership with Amusnet came as an absolutely logical step.

“We are thrilled to enter into an agreement with such a famous operator in Italy. Betflag is a big name in the online casino industry, and we are excited to make our games available to their players.”

“The direct integration with Amusnet is an important step that allows us to offer our users an ever wider range of entertainment, with products that immediately have garnered unanimous acclaim and that go well with our business strategies”.

Earlier this year, the famous Bulgarian software provider made headlines by announcing the completion of the rebranding process. After six years as an online vertical of EGT (Euro Games Technology), the division got a new name and became Amusnet Interactive.

According to Amusnet management, the new brand name better reflects its core offering and company values. Indeed, in recent times, the company has grown immensely not only in terms of products but also in terms of partner operators and markets. At the moment, its portfolio can brag of over 200 top-notch titles: online slots, table games, and recently introduced live roulette.

Following the latest agreement, BetFlag will be able to offer its customers a diverse selection of games from Amusnet Interactive. Some of the titles, including Royal Secrets, 40 Super Hot, 100 Super Hot, and 20 Golden Coins, are already available to players, with more releases waiting in the wings. BetFlag is one of over 750 operators in more than 20 markets that have content deals with Amusnet.

The post Amusnet Interactive Strikes a Content Deal with BetFlag to Grow Its Presence in Italy first appeared on RealMoneyAction.com.