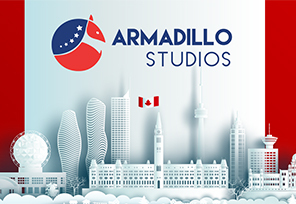 Armadillo Studios, one of the fastest-growing developers known for its premium, innovative and engaging online casino content, announced that the company has taken an important step towards achieving its global expansion goal thanks to the latest approval.

Namely, this well-known studio and casino software developer announced that the brand has been given the green light to enter the recently regulated Ontario iGaming market thanks to a guaranteed certification.

This thumbs-up comes right from the competent authorities of this Canadian province. More precisely, it was issued by the Alcohol and Gaming Commission of Ontario.

Armadillo will go live in this Canadian province with its premium content that will comply with Ontario law.

Given that the brand has recently been established, we can say with certainty that this is a very important step. The Ontario market was launched in early April this year, and experts believe that this Canadian province will take the place of one of the keys and largest iGaming markets. By securing this certification, Armadillo will step up at the beginning of its career and guarantee a presence in one of the fastest-growing markets.

This is quite the milestone for the company, and it is thrilled to be among established providers that have recently made their way into the newly launched Canadian market.

David Stoveld, COO of Armadillo Studios, gave his comment regarding new certificate and said: “We are proud to enter Ontario under new regulations. It has always been clear that Canada prioritizes keeping entertainment and safety in check, from environmental control to alcohol consumption, and I would expect no difference from online gambling.”

Armadillo Studios is a fast-growing iGaming software developer that was established during the previous year. The head office of this brand is located in Miami, Florida, and the studio is focused on producing content that suits the US market. The team consists of veterans from all over the world who are also players, which take into account the need for punters, which will significantly improve the quality of games and the unforgettable iGaming experience that players will receive.

One of the first steps the supplier took was to launch several hit online casino titles, but we must also mention the agreement between this studio and the famous MMA fighter Amanda Nunes.

Punters who want to check out the titles of this great developer can do so through SlotMatrix, EveryMatrix’s well-known and extensive B2B aggregation platform.

This platform is very famous in this industry for offering several online casino releases integrated thanks to the brand deals with various famous companies.

The post Armadillo Studios Receives Certification from The Alcohol and Gaming Commission of Ontario first appeared on RealMoneyAction.com.