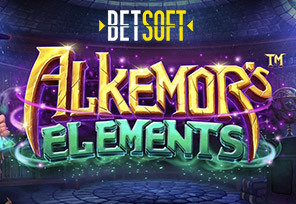 Betsoft, one of the most renowned providers of US-friendly online slots, has released Alkemor’s Elements

, a sequel to the popular Alkemor’s Tower

that hit internet casinos more than six years ago. The famous Elemental Spells feature has evolved into an even bigger event, taking the magical concept to the next level literally. Get ready for a one-of-its-kind adventure chock-full of Free Elemental Wild Spins and exciting wins of up to 1,200x bet!

Who Doesn’t Need A Little Magic?

The powerful wizard first seen in Alkemor’s Tower is back with even more impressive magic he gladly demonstrates across the 5×4 grid of the new smash hit from Betsoft. Alkemor’s Elements is a beautifully crafted 25-line video slot that boasts a huge winning potential packed in its innovative bonus features.

This time, the enchanted tower lets players unlock the magical cupboard for the chance of Free Elemental Wild Spins, Elemental Spells, or up to 12 free spins triggered by scatter icons. Those who dare to fill the glass vials in the Elemental Counter will witness fantastic wins of up to 1,200x total bet. The latter, by the way, can be as small as $0.25 or as high as $200 while plenty of options in between the two extremes makes this online slot a game for everyone.

is a sequel that mixes a Betsoft staple, such as the progression counter for the game cycle, with an innovative free spins feature to make a very special release. The betting range is intentionally broad to create appeal across all player levels and, as always, the narrative and gameplay are compelling. It is a magical release and who doesn’t need a little magic right now?”

Elemental Cycles is a special progression game played in rounds of 10 paid spins. Four Elemental Wilds – Earth, Wind, Fire, and Air – appear on the reels to fill the counter even if they are not part of a winning combination and bring the explosion of prizes.

Players can collect up to five Elemental Wilds during the cycle, however, just one such wild is enough to make the miracle happen. Free Elemental Wild Spins light up the grid, generating magnificent wins with the help of Elemental Spells able to upgrade reels with more advantageous symbols or change the icons’ positions. Plus, hitting at least three scattered Golden Keys will trigger the free spins feature and award up to 12 treats on the house.

Betsoft, widely known as a producer of some of the highest RTP slots in the USA, also has thought about slot buffs who do not want to wait for the feature to be unlocked. The most impatient punters can simply press the Buy Feature button and get instant access to 12 free spins for a 56x bet.

The post Betsoft Brings Magic Back In Its Latest Slot Alkemor’s Elements™ first appeared on RealMoneyAction.com.