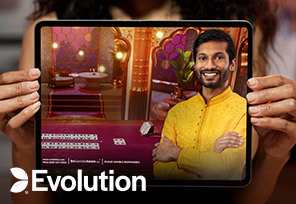 Evolution, the world’s leader in providing live casino solutions, has replenished its award-winning portfolio with Super Andar Bahar, a unique fast-paced online version of the traditional Indian card game. The highlight of the novelty is a series of side bets that allow players to win up to an amazing 4,000x! Streamed from a stunning Indian-themed studio for an authentic gaming experience, this easy-to-play game offers ten engaging side bets with randomly applied multipliers for truly epic payouts.

Evolution has launched Super Andar Bahar, spicing up a popular Indian game with a series of side bets that let players win very high multipliers and pocket hefty prizes.

In the main game, players need to predict on which side of the table – the Andar or Bahar side – a card will be dealt that matches the first-dealt “Joker” card, which is sometimes also referred to as the “house card”. The goal of playing the side bets is to predict the number of cards dealt after the “Joker” until a matching value card is dealt. Between one and five random multipliers are randomly applied to the side bets in every round, giving players a chance to win up to 4000x!

“Central to our product strategy is giving players everything they want and even some things they don’t know they want. We are delighted to have done just that by bringing a super-special version of the Indian classic Andar Bahar to Evolution’s live casino. Andar Bahar is well known throughout India and it’s a great game how it is. However, we could not resist the temptation to spice it up a little with a series of side bets that allow players to win astronomically high multipliers, which is something we felt was missing from this superb game.”

Live Teen Patti Is Waiting In The Wings

One of the world’s largest online gaming companies, Evolution now owns NetEnt, Red Tiger, and Big Time Gaming, taking advantage of almost infinite opportunities brought by regulated markets worldwide. At the beginning of the year, the company rolled out its Lightning Roulette in New Jersey while at the end of last year, it introduced the entire Live Casino suite in the regulated market of Buenos Aires Province.

Speaking of the launch of Super Andar Bahar, he also said:

“I think players are going to appreciate how we kept the base game traditional in every way but added this fun twist as an optional side bet. And there’s more to come! To further support this market, we will be launching another popular Indian card game, Teen Patti, later this year.”