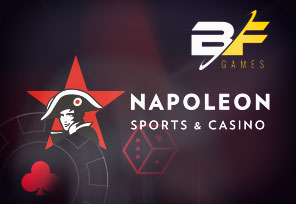 BF Games, a premium developer of innovative online slots, has expanded its business scope even further across Belgium thanks to the recently signed agreement.

The deal saw the shaking of hands between BG Games and the globally renowned online operator Napoleon Sports & Casino.

The popular provider has taken another step towards meeting its goal of expanding across Europe, which has also influenced the brand’s growth strategy.

Namely, Belgium is a key market with a large gaming audience, which is very suitable for a developer whose titles will reach even more punters.

As specified in the agreement between the two brands, the operator’s offering will be expanded with BF Games’ online casino products that will allow punters to get an unforgettable iGaming experience thanks to high-quality visuals and sound design.

The distribution will include providers of top-performing online products such as the fruit-themed Stunning Hot, Royal Crown, and Ancient Secret, fan-favorite Buffalo Trials, and Wild Jack Remastered. These releases will win the heart of the punter in a short time thanks to the fantastic features including Cash Mesh Bonus, the Persistent Wild feature as well as its in-game jackpots.

Commenting on collaboration, Claudia Melcaru, Head of Business Development at BF Games, said: “It is a real privilege to team up with Napoleon and to further increase our presence in Belgium. It is a great opportunity to deploy our games to an enthusiastic, highly demanding audience that we are confident will enjoy the wide range of content that we can offer.”

The previous year was marked by key partnerships for the brand. However, 2022 will not go unnoticed. Namely, since the beginning of the New Year, Napoleon Sports & Casino has shaken hands with several globally known casino software developers including Tom Horn Gaming, Booming Games, and Pragmatic Play.

The deal with Pragmatic saw the launch of the developer’s online slots vertical on the platform, including popular releases such as Queenie, Extra Juicy Megaways, Snakes, and Ladders Megadice, as well as multi-award winning Gates Of Olympus.