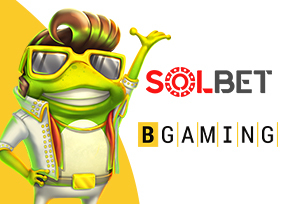 BGaming, casino software developer, decided after a short break to further expand its global reach thanks to a new partnership!

At the beginning of June, this popular supplier of engaging products sealed a significant agreement with one of the leading casinos in the industry, Platincasino. The deal saw the launch of the provider’s portfolio on the new partner’s platform, which further strengthened the company’s position in Europe.

However, the company wants to further expand its business to further improve its position in the industry.

BGaming, which also previously teamed up with United Remote, has officially announced that it has joined forces with one of the choice number one operators in the LatAm region, thus confirming its presence in Latin America.

From now on, its online casino titles will be available to players on the Solbet Casino platform! As announced, the distribution includes plenty of amazing, feature-packed, and engaging online casino releases.

Players who decide to check out the games section of the operator will be able to indulge in their favorite form of entertainment with table games Multihand Blackjack and American Roulette, some of the most sought-after online slots Aztec Magic Bonanza, Elvis Frog in Vegas, Fruit Million, and Wild Cash, crash multiplayer game Space XY as well as much more!

The partnership marks a major milestone for both brands. First, BGaming, as we have already mentioned, will additionally strengthen its business roots in Latin America, which is becoming more and more popular every day. In this way, the developer will reach an even wider audience, which will bring the company closer to achieving its goal.

On the other hand, the operator will take advantage of the developer’s popular products and thus justify the trust of its old clients and attract new punters.

Alexandr Shavel, Head of Business Development Department at BGaming, commented: “We’re pleased to see our gaming content is popular with players from Latin America. We’ll continue to cement our competitive advantages to provide LatAm markets with high-quality and lightweight content. To earn the trust of Solbet is a valuable milestone on the way to expand our regional presence.”

Juan Pablo Uribe, Solbet’s Business Development Manager added: “BGaming is one of the leading providers within our brand, and we are delighted to offer its wide selection of games to our customers in Peru, Brazil, and Paraguay.”

The post BGaming Goes Live in Latin America in Partnership with Solbet first appeared on RealMoneyAction.com.