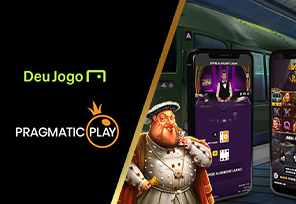 Pragmatic Play, one of the leading and premium casino software suppliers of innovative online slots and popular live casino games, after only a few days of the last expansion, brings amazing news!

Namely, in the middle of August, the company once again confirmed its presence in Latin America and improved its position in this region thanks to the collaboration with one of the leading casinos in the industry, Smashup.

Pragmatic proudly announced that it joined forces with a well-known operator and thus once again guaranteed a leading position in the Brazilian market!

Players who choose Deu Jogo will have the opportunity to explore some of the most sought-after titles in the online gambling industry developed by the developer.

In the games section, you can now find some of the recently launched online slots such as Hot To Burn Extreme™, and Black Bull™, award-winning title Gates of Olympus, as well as fan-favorite The Dog House.

Also, for fans of live casino programs, the companies have prepared some of the most prominent games such as the classics Roulette and Blackjack and the most recent one Boom City.

Sports fans are not left out either, so they will be able to enjoy the fantastic releases offered by Pragmatic Play’s Virtual Sports vertical.

Thrilled to Be Partners!

Victor Arias, Vice President of Latin American Operations at Pragmatic Play, said: “We are thrilled to be partnering with Deu Jogo, and bringing multiple products live with them simultaneously. Our vast array of industry-leading products allows operators to bolster their portfolio through a variety of different verticals and we are excited to see the reception Deu Jogo’s customers have to our games.”

Arthur Arruda at Deu Jogo said: “This partnership with Pragmatic Play demonstrates our development as a prominent operator within Brazil. Our players will now gain access to three different verticals from Pragmatic Play, each offering players a different way to enjoy our platform. Its games are renowned for being of the highest quality and provide unparalleled engagement and we are pleased to welcome them to our platform.”

In addition to the expansion in Latin America, Pragmatic Play has left its foothold in the UK as well as in Ireland thanks to the partnership with Hollywoodbets. The distribution saw the launch of the provider’s three verticals on the platform of the new partner including online slots, live casino games as well as virtual sports.