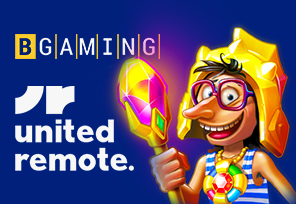 After another successful confirmation of its presence in Europe, thanks to a deal with Delasport, BGaming, one of the leading casino software developers in the iGaming industry continues to meet its global growth goals.

This popular brand announced that it has once again left its footprint in Europe thanks to the collaboration with renowned iGaming brand – United Remote.

The launch of BGaming’s content on the platform of this well-known aggregator will open new opportunities for the developer in Europe. With this move, the company continues its strategy of expansion in this region which will favorably improve its position in the industry as well.

As the company announced, the distribution will include an extensive number of online casino releases that are one of the most sought-after among punters around the world.

United Remote is one of the most well-known platforms and aggregators in the industry that has so far entered into partnerships with several famous B2B brands. Thanks to this, its partner clients will now have the opportunity to try out its innovative and outstanding online casino releases including hits such as Aztec Magic MEGAWAYS El, Elvis Frog in Vegas, as well as a not-so-long-ago launched collection of Fast Games.

Eliana Mennonna, Product Manager at United Remote, gave her comment regarding the new expansion and said in the statement:”Teaming up with BGaming is a great opportunity to expand and solidify our market footprint. We’re excited to have their games available on our platform.”

Alexandr Shavel, Head of Business Development Department at BGaming, also commented and added: ”The partnership with United Remote allows BGaming to extend its further growth in key European jurisdictions. We are delighted to have such a trusted partner as United Remote by our side and continue to develop new high-quality games popular with European gamers.”

BGaming is a company that was established in 2018. The brand is of Belarusian origin and is known for its innovative and top-tier online casino releases. So far, it has partnered with some of the most renowned platforms in the industry and with over 300 operators worldwide.

One of the most significant steps the company has taken recently is entering the Social Casino Market. Namely, at the end of last year, the brand merged with the well-known German Ously Games.

The developer’s portfolio today consists of over 60 fantastic titles that have gained great popularity in a short time. However, we believe that many more amazing products await us soon.

“Bgaming Continues Its Extension On European Jurisdictions And Joins Forces With United Remote’’, bgaming.com, May 25, 2022.