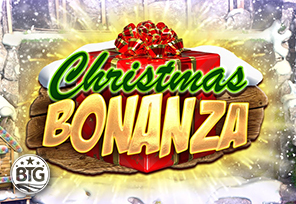 Big Time Gaming, one of the industry’s most acclaimed software providers of innovative online slots, has added a merry twist to its legendary game and released Christmas Bonanza, a spectacular mix of cascading reels and Megaways™. To keep players in the holiday spirit, the latest title from the famous Australian brand not only offers a fairytale setting created by the laying snow but also fantastic presents, including an unlimited win multiplier during free spins.

It looks like this winter Big Time Gaming has everything players need for a perfect Christmas, letting them benefit from a one-of-its-kind combination of cascading reels and Megaways. It is not the first time, BTG tries out merging different mechanics, for instance, in Star Clusters Megapays™ launched in April, it combined Megaclusters™ and Megapays™.

Christmas Bonanza is driven by Megaways™, which is arguably the world’s most popular slot engine at the moment. Santa, however, works miracles this year, adding the power of cascades to 117,649 ways to win and creating massive pay potential. What’s more, the reels can cascade in both directions, generating epic prizes to make the best time of the year even more exciting and rewarding.

Slot buffs will easily figure out whether they have been naughty or nice as they search for Santa’s gold. Landing four Gold scatters will trigger the free spins feature and award 12 tasty rounds while each additional scatter presented on the screen will add five extra spins.

The free spins bonus brings a true Christmas atmosphere thanks to an unlimited win multiplier that starts at 1x and increases by 1 after each reaction, creating tremendous payout potential. During the feature, scatters appear only in the carts above the reels, three will award an additional 5 free spins while four will deliver 10 extra spins.

This engaging Christmas-themed online slot is the third Bonanza edition. The original Megaways™ version brings the story of the Wild West and gold-digging and contains cascading symbols. Its successor Bonanza Megapays™, which has the same theme, was the very first title to feature Megapays™ mechanic created to provide massive payouts of up to 17,926x bet.

Megapays™ is also a driving force of Danger High Voltage debuted earlier in cooperation with Relax Gaming. As for Bonanza Megapays™, it was remastered from the original with a full-screen portrait and seamless HTML5 technology to allow for a single build of the game and great performances across desktop and all mobile devices.