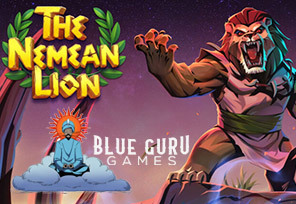 Blue Guru Games, one of the fastest-growing developers of innovative online slots has announced the launch of its first online release which will also be launched in the US market.

Namely, the premium developer introduced its clients to its first game called The Nemean Lion, which will be available to players on the platforms of several operators. Also, the company has expressed a desire to launch this product on the US market and thus expand its global reach in the second half of this year.

The supplier is part of LeoVegas Group’s investment sector called LeoVentures. After the Group decided to invest its capital in several other projects, this new company was formed and now has 30 members.

More About the Product

The Nemean Lion features 5 reels, 5 rows, and 40 paylines, and the game is powered by Bragg Gaming Group. Punters who decide to explore this Greek mythology-themed online slot will have a chance to win a life-changing sum of money – up to x25,000 the bet!

This fantastic title also features the Scatter Symbol Collection as well as Roar to Victory Bonus Games with multiplier positions. If players manage to land 3 scatter symbols on the reels, they will be rewarded with 12 bonus spins!

Andrew Braithwaite, CEO of Blue Guru Games, said:“It’s really nice to be releasing our first game. This is an important milestone of course and there’s so much more to come. We’re particularly excited about the US which provides such an exciting opportunity. We’re a great team having lots of fun making games, and we can’t wait to get our ideas out and see them played!”

Gustaf Hagman, CEO of LeoVegas Group, said: ”the ‘Blue Guru Games’ first game launch is a milestone. It is fantastic to see how quickly they have moved from concept to inception and a real testament to the strong commitment and entrepreneurship we have within the Group and our portfolio companies. We now have our eye firmly on the US market, where the thirst for high-quality games perfectly complements our aims and capabilities. I look forward to our continued development and growth!”

Blue Guru Games is a Malta-based developer who has announced that the company will launch new online releases in the coming months. During May we will be able to enjoy the Octopus Armada while June will be marked with Curse of the Mummies.

‘’Blue Guru Games launches its first slot game and aims for the US’’, europeangaming.eu, April 25, 2022.