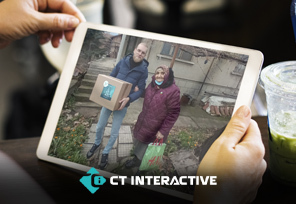 CT Interactive, one of the leading and most recognizable casino software providers in the iGaming industry, makes efforts to seal this year with one important step that made many households happy!

During 2022, the developer took numerous steps that contributed to it drastically expanding and strengthening its position in some of the key markets in the industry, including the recently announced deal with TimelessTech.

However, the brand once again proved why it is at the top of the list of the most praised and best B2B brands in the industry after it did another good deed and launched its campaign!

CT Interactive announced the launch of its “Christmas smile” campaign!

Namely, the brand’s representatives disguised themselves as Santa Claus and his elves and went to visit villages around the capital, Sofia.

The developer made several families in need happy by providing them with boxes with goods so that they could celebrate the upcoming holidays with happiness, joy, and without worries

Over 230 families from 5 smaller villages near the capital received gifts. The action lasted for two days, and representatives of CT visited Dolni Bogrov, Gorni Bogrov, Ravno pole, Krivina, and Kazichene.

At the end of the day, everyone deserves carefree holidays!

‘’CT Interactive wants to extend its gratitude to the mayors of Dolni Bogrov, Gorni Bogrov, Ravno pole, Krivina, and Kazichene and their teams supporting us during the campaign.’’

“We gave presents to over 230 families from small villages in the Sofia vicinity. We were distributing for two days to people from Dolni Bogrov, Gorni Bogrov, Ravno pole, Krivina, and Kazichene. We are delighted to have the opportunity to be part of those families’ holidays bringing the Christmas spirit into their homes,” said Lachezar Petrov, CEO of CT Interactive. “We will continue with raising such campaigns,”he added.

CT Interactive is a very successful brand that was founded in 2012 and in a short time has established itself as one of the leading B2B brands. The headquarters of the company is located in Sofia, but the developer has spread its business roots across several key markets in the industry.

Although the provider concluded numerous collaborations during the year, we will recall only one of the most recent. Namely, it entered Malta just a few days ago after joining forces with IZIBET.

We believe that more good news awaits us in 2023, and until then we wish you happy holidays with your loved ones!