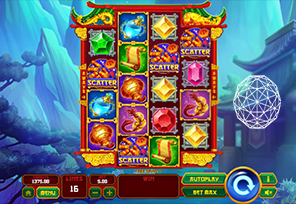 Tom Horn Gaming, a Malta-based software provider of innovative online casino slots, has announced the launch of a brand new title Dragon vs Phoenix. Inspired by the rich Asian mythology, the latest spinning adventure features two fearsome and mighty creatures who can get super wild as they unite in the ultimate free spins battle to award the lucky ones with huge wins of up to 5,684x stake!

Which Wild Beast Will Bring You Luck?

Continuing its expansion across the European regulated markets, Tom Horn Gaming also makes every effort to further enlarge and diversify the company’s portfolio of online slots. The latest addition to the top-notch library is an immersive story built around the two beasts and their never-ending battle for supremacy.

…is a medium volatility game with an unusual 4-reel grid, which has enough room for 16 pay lines or 8 lines that pay both ways if you like it better. The story sets players on fire right from the outset, asking them to choose a side and decide whether they want to play with Dragon expanding wild or Phoenix mega wild.

Dragon wilds appear on reels 1 and 3, expanding to cover the entire reel and replacing all other symbols except scatters. In their turn, Phoenix mega wilds are triggered by the appearance of the Phoenix wild icon on reel 2 or 3, which will expand to fill a square of 2×2 symbols in a random direction. The only exception is when the wild feature is activated in the corners of the reel grid, being able to expand in one direction only.

And that happens during the free spins feature activated by landing 3 or 4 scatter symbols anywhere on the reels. Players get 5 or 7 spins respectively, however, the highlight of the bonus is that both wilds – Dragon and Phoenix – join forces to complete as many winning combinations as possible and generate truly staggering prizes! Unfortunately, free spins cannot be retriggered but, of course, it’s a small downside in comparison to the benefits brought by the feature nicely incorporated in this fully mobile-optimized slot.

“Dragon vs Phoenix is a beautiful game. It features stunning graphics and the soundtrack adds to the overall immersive and engaging player experience. Picking the wild feature is a nice add-on to let players ‘moderate’ their way of play through the game. The world of Asian fables and fantastic creatures such as dragons and phoenixes keeps on attracting players in different markets and we believe the game will be a hit with our customers”.

The post Discover The Wild World Of Mighty Creatures In Tom Horn’s Dragon vs Phoenix Slot first appeared on RealMoneyAction.com.