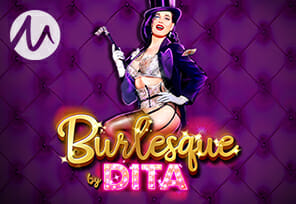 Microgaming, the leading provider of iGaming content, has announced the global launch of its latest exclusive brand slot title, Burlesque by Dita

. The title is developed by Aurum Signature Studios in partnership with Eurostar Studios featuring the talented Dita Von Teese.

The title takes players to the extravagant world of international superstar Dita Von Teese and the it features dazzling colors inspired by the performer’s lavish cabaret.

Additionally, the title features the Wild Pleasure mechanic, which turns up to five reels to Wild symbols. If the players collect at least three scatter symbols, they will earn a VIP ticket which grants free spins bonus rounds. Feathers from Dita’s famous feathers dance can randomly turn symbols into up to 6x multipliers.

Representatives from Microgaming, which recently awarded big on its Mega Moolah game, say that they are thrilled about working with Aurum Signature Studios and Eurostar Studios on the title and that they are looking forward to seeing the players enjoy it.

is an icon and we were thrilled to get the opportunity to work with Aurum Signature Studios and Eurostar Studios on such a glamorous slot. With a glitzy soundtrack and entertaining gameplay, we can’t wait to see players enjoy this opulent slot,” said Andrew Booth Director of Games at Microgaming.

Officials from Aurum Signature Studios they’ve enjoyed their work on the title with Microgaming and Eurostar Studios players can expect a title full of rich features.

“We’ve had so much fun working on Burlesque by Dita

and teaming up with Microgaming and Eurostar Studios on this exciting new slot that shines a spotlight on the Queen of Burlesque. This slot is full of rich features that give players a front row seat to an unmissable showcase and wins of up to 12,000x their bet,” said Madelein Özok Head of Aurum Signature Studios.

The Eurostar team says that working on Burlesque by Dita with their partners has been a fantastic experience and that the title is packed with spectacular features and visuals.

“Collaborating with Microgaming, Aurum Signature Studios, and Dita Von Teese on this slot has been a fantastic experience! Burlesque by Dita

is packed with spectacular features and glamorous visuals, providing non-stop action and excitement, including four free spin bonuses for players to choose from, each with its own fabulous feature set,” said Tara Townsend Co-founder and CEO at Eurostar Studios.

Microgaming is one of the pioneers in the iGaming industry. The company developed the world’s first online casino back in 1994 and the first mobile casino software in 2004. The company has headquarters on the Isle of Man, which opened in 2017. Its products include casino, poker, bingo, sportsbook, land-based, and live dealer games.