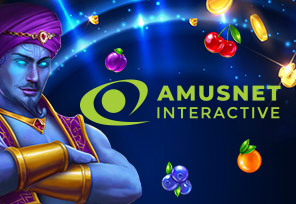 EGT Interactive, a well-known provider of online casino games, has opened a new chapter in the company’s brand evolution and officially become Amusnet Interactive. Announced at the end of March, the process of rebranding has been successfully finalized to mark the sixth birthday of this Bulgarian-based software developer in the best possible way. The new name is intended to better reflect the diversity of this casino content supplier, as well as drive future growth.

Significant Milestone in the Company’s Evolution

EGT Interactive, a Bulgarian-based provider of online casino slots and other games, has announced the official rebranding to Amusnet Interactive. The big news comes soon after the company penned a strategic partnership with iFortuna to expand its presence in the Czech iGaming market.

Launched in 2016 as an online vertical of EGT (Euro Games Technology), the Interactive division has always been renowned for its high-quality and mobile-friendly products that stand out by stunning visuals and engaging extra features. With the iGaming sector transforming fast, the company decided to stay one step ahead by evolving to a new brand name that better reflects its core offering and company values.

“EGT Interactive has grown immensely in terms of products, partner operators, markets. We now have more than 200 games and work with over 750 operators in 20-plus markets.

“Our new Amusnet Interactive brand is a significant milestone in our development. This is the most effective way to communicate our business growth and values.”

“Our partners are fully on board with our new brand, supporting our positioning and backing our drive for yet more innovation and desire to deliver new exciting games. It’s an exciting time for us in one of the world’s most vibrant sectors.”

Retaining its tagline We Make People Play, Amusnet Interactive looks forward to further growing the company’s presence in all gaming verticals of the competitive online gambling industry. Over the last few months, it has entered a series of new partnerships to strengthen its position in several regulated markets.

Some of the most prominent deals include the agreement with Salsa Technology that made it possible to bring the brand’s slots right in front of the diverse LatAm player base and the partnership with Signorbet that provided access to the attractive Italian market. Besides online slots, Amusnet’s engaging portfolio also features video poker, keno, and both RNG and Live dealer roulette.

To keep pace with the growth of the enterprise, Amusnet Interactive is also moving to larger state-of-the-art office premises in Sofia able to accommodate a bigger team of game designers, developers, and other professionals needed to create top-notch gambling products.