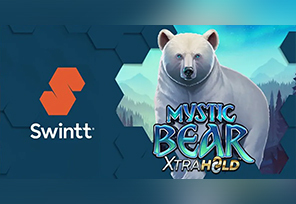 After a few successful online slots, such as The Crown starring Vinnie Jones, a famous soccer player and actor, it’s time to move to cooler parts and get to know the Mystic Bear which gives a chance to win 10.000x the stakes!

The story is set in an enchanted forest, on a 5×3 grid where players will encounter various animals…

So the highest paying symbols are represented by a Polar Bear, Wolf, Eagle and Squirrel. The lowest-paying symbols are cards – A, K, Q, and J. The online slot features 25 fixed paylines and all wins pay left to right.

Are there any Special Symbols?

The Frozen Pawprint is the wild symbol of the game, meaning that it will substitute all symbols except Full Moon symbols and help them create a winning combo. But that’s not its main role! The wild symbol is also the scatter, so landing 3, 4 or 5 Frozen Pawprints triggers 5, 8 or 10 Bonus Spins.

During the feature, the second, third and fourth columns will form the Mega Symbol.

Now, the player will only need to land matching symbols on the first and fifth reels to make a winning combination of 5. The Polar Bear brings the highest reward – 20x your stake for 5 in the winning combo.

Wait, there is more!

Whenever players land 6 or more Moon Symbols, they will activate the XtraHoldTM Respin feature, which is irresistibly reminiscent of the popular Hold & Win bonus. Full Moon symbols carry monetary values…

So during the feature, the triggered symbols will remain locked in their position while the other fields remain empty. The feature will start with 3 Respins.

Whenever another Full Moon symbol land on the grid, the number of Respins will be reset to the starting number. The feature will end until no new Respins are triggered or when Full Moon symbols completely fill the reels.

In the end, all triggered Full Moons will be collected, revealing the prize!

David Mann, Chief Commercial Officer atSwintt, commented: “Swintt has always been known for its innovative and exciting bonus features, so having already introduced players to popular additions such as XtraLockTM and XtraWildTM, we’ve delighted to debut our new XtraHoldTM system in Mystic Bear. ”

“This ground-breaking game mechanic enables players to fill the reels with full moon symbols as they unlock increasingly valuable instant cash prizes. With the Mystic Bear XtraHoldTM bonus awaiting any player who’s lucky enough to completely fill the game board, it’s a hugely rewarding feature that will help the new slot become an instant classic when it debuts at our partner casinos later this month. ”