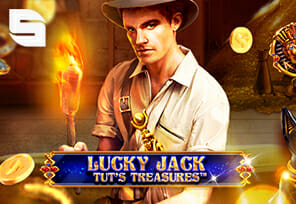 Discover the secrets of the ancient world in the new online slot powered by casino provider Spinomenal.

In LuckyJack – Tut’s Treasures you will be transported to the ancient world along with a researcher named Lucky Jack. He will lead during the journey because only he knows the way to gold and special features.

This young scout will lead us to a grid located in one of the dark rooms of a pyramid or similar ancient building. The grid is made up of 5 reels and 4 rows with a total of 25 paylines. Low-paying symbols will be in the theme of cards K, Q, J, and A, and together with medium-paying ones Tutankhamun, black cat, scarab, Egyptian cross – Ankh will adorn the grid. There are three high paying symbols, which make up the Wild, Bonus symbol, and Scatter.

The theoretical Return to Player is 96.1% which is very close to the average. This average volatility game brings you the opportunity to win up to x1000 your stake! The minimum bet you can choose is 0.25 coins, while the maximum will surely suit high rollers, and it is 250 coins.

The Power Spin feature can appear in the base game and will remove certain symbols for the current round.

To activate the Grand Finale feature, it is necessary to collect at least one scatter symbol during the Free Spin round.

Spinomenal’s CTO, Omer Henya, commented: “Lucky Jack – Tut’s Treasures is just the game to announce the launch of our epic Lucky Jack series. This first chapter is jam-packed with fun features that each contribute to an awesome experience on the reels. Riches await those who can safely negotiate the dangers of tracking down Tut’s Golden Treasures.”

Spinomenal is one of the most famous casino software developers who often surprises us with a new release. The Lucky Jack slot was preceded by the iconic Book of Champions.

Also, we can say that this provider is serious in its intent to become one of the leaders in the iGaming industry. It has recently expanded its business network to Bosnia, Spain, Netherlands, Belarus, etc.

The post Embark on an Adventure from Spinomenal in New Lucky Jack Tut’s Treasures Slot first appeared on RealMoneyAction.com.