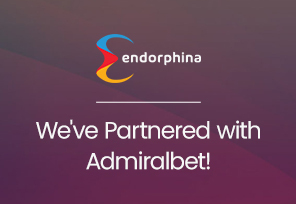 Endorphina, one of the most acclaimed and prominent casino software suppliers in the online gambling industry, delivers another amazing piece of news that will delight players from another fast-growing market!

The developer teamed up with the well-established B2B brand Superbet just a few days ago and on that occasion further strengthened its position in Romania!

However, the company decided to expand its global reach to one more neighboring country and thus further strengthen its position in Europe!

Endorphina has set out to conquer Serbia, a popular and fast-growing market, thanks to an agreement with one of the leading operators in this country, AdmiralBet.

The giants announced that the partnership will bring an array of impressive, engaging, and interesting online casino content to Serbia!

Players from this country can now explore some of the most sought-after and highest-quality online casino games in the industry on the AdmiralBet platform, from Endorphina’s classic hits collection!

Senior Partnership Manager at Endorphina, Zdenek Llosa, shares a few words on the new partnership: “After a successful entry to the Serbian market, we are proud to announce our next partnership with the well-known operator Admiral Bet. Our diverse portfolio is designed to offer something to suit every player’s taste and we look forward to working together as we provide quality entertainment to players in Serbia.”

Head of Online Gaming at AdmiralBet Serbia, Milan Djurmez, also comments on the new partnership: “AdmiralBet is happy to enrich its slots portfolio with such a prominent and innovative game provider as Endorphina. Their games are already well known to Serbian customers which makes us confident that this partnership with Endorphina was the right move in our constant mission of providing players with the best possible gaming experience.”

This is just one more in a series of successful collaborations that Endorphina has concluded in the past few months.

The end of the previous year was marked by a deal it concluded with StarCasino! Thanks to this cooperation, the provider launched its portfolio in Italy and thus strengthened its position in this market.