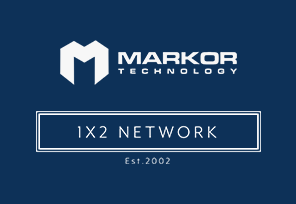 1X2 Network, a well-established casino software supplier in the online gambling industry, has once again found a way to further expand its business roots – this time with Markor Technology!

The developer boasted of a new success just a few days ago in which it managed to leave its footprint on one of the leading markets in the iGaming industry, the Canadian province of Ontario after joining forces with 888casino.

However, the New Year brings new surprises! Let’s find out more about the new deal!

As part of its latest deal with 1X2 Network, Markor Technology

will gain a wide range of incredible online casino content onto its premium aggregator platform!

The distribution will include 1X2’s stellar portfolio of casino content, which will now be available on a platform that features more than 6,000 games from over 75 software providers.

However, that’s not all; from now on, content from Iron Dog Studio will also be available on this aggregation platform! Among the titles that will be part of the distribution are the hits Rum and Raiders, Crashout Fireworks, Wolf Strike Hold and Win, and Gods of Asgard Megaways™.

Kevin Reid, Chief Executive Officer at 1X2 Network, said: “The Markor tie-up is a good fit for us. We’re both ambitious, exciting companies that innovate through technology and have both seen an enormous amount of growth. There’s a lot of mutual admiration, and hopefully, we will continue these remarkable growth stories as partners for many years to come.”

Melissa Summerfield, Chief Executive Officer at Markor Technology, added: “We only curate the best content the online gaming space has to offer on our aggregation platform, and we’ve been fans of 1X2gaming’s and Iron Dog’s games for many years, so we’re thrilled to have them on board. This is an important step in our mission to create the best online casino solution on the market.”