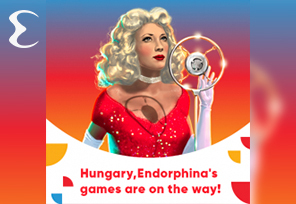 You must have heard about Endorphina and the amazing deals that the company has made lately. If you thought that was the end, think again!

This popular casino software developer has once again expanded its global reach by entering another European market, and on this occasion, brought us amazing news!

In the last few months, Endorphina has significantly strengthened its position in Europe thanks to the multiple agreements that followed.

For example, the brand stepped into Bulgaria at the beginning of May. The distribution included titles such as Water Tiger, the very popular Hell Hot 40, Asgardians, fan favorites Solar Eclipse, and 2021 Hit Slot.

The supplier has announced that its portfolio went live in another key market, HUNGARY.

According to the agreement, Endorphina will present its amazing content to players from Hungary! More than a dozen fantastic, feature-packed, top-tier, and engaging online casino releases that punters love are included in the distribution!

Players from Hungary can now indulge in their favorite form of entertainment with fan-favorites 2022 Hit Slot, Water Tiger, Hell Hot 40 as well as much more. The full list of releases available in this market can be found on the provider’s website.

Džangar Jesenov, our Compliance Manager at Endorphina, shares a few words on the new expansion: “Endorphina continues to expand its international cooperation. One of our main goals is to have satisfied customers and to create long-term partnerships. We would like to transfer this vision to another very interesting country that has its own tradition in online gambling – Hungary. We have prepared a special list of interesting games that have not yet been available to Hungarian players. We’re looking forward to working together. See you in Hungary!”

The developer announced just a few days ago that the brand concluded another major agreement with the well-known operator PepperMill Casino. The brand has a strong influence on even two markets, including Belgium and the Netherlands. This would mean that Endorphina guaranteed the expansion of its business roots and this promising partnership saw the launch of several fantastic titles on the operator’s platform.

In addition to all of the above, we must mention that Endorphina recently strengthened its presence in the Baltic region thanks to the collaboration with the innovative and popular operator Olybet.