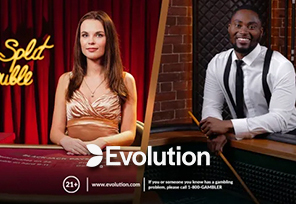 The world’s indisputable leader in providing live casino entertainment, Evolution has announced the launch of its Live Craps in Pennsylvania. Premiered at the beginning of 2020 as the first-ever live online version of the extremely popular and engaging dice game, this exciting title is now available to US players who reside in the Keystone State.

Equally suitable and engaging for seasoned pros and newbies, this game delivers all the thrills of a traditional Craps table set inside a fashionable brick-and-mortar venue in combination with an easy-to-play user interface and a detailed tutorial.

Evolution has further expanded its offering in the USA, letting players from Pennsylvania tap into the one-of-its-kind atmosphere provided by its Live Craps game. Residents of the state have already had plenty of opportunities to get familiar with the world-leading content provided by the Swedish iGaming giant thanks to the company’s collaboration with Parx that started more than two years ago.

Considering the United States as a strategic region, Evo is constantly looking for new possibilities to expand its coverage and grow in the regulated markets through various partnerships. Apart from Pennsylvania, the company has a strong presence in New Jersey, West Virginia, and Michigan. In line with its growth strategy, Evolution is planning to launch Live Craps in the two latter states.

“This game was the very first online Live Craps game in the industry, and it was a landmark moment for Evolution. We’re very proud to be able to offer it to our operators and their players in the state of Pennsylvania today.”

“The game itself is going to thrill Craps enthusiasts throughout the US and is sure to attract some new fans. The game captures all the excitement of a traditional Craps table, and the decadence of the speakeasy era, and brings it to the online casino world in style. We can’t wait to see what players think of it and look forward to launching this game into more states in the future.”

It’s no secret, Craps is a very popular game in land-based casinos, especially in the United States. Set in a speakeasy-style studio, the unique online version created by Evolution has all chances to become the next firm favorite of players, both longtime fans of this dice game and absolute rookies.

Thanks to a handy interface with helpful features and a simple interactive tutorial that explains the rules of the game and shows the best way to enjoy playing it, Live Craps is a lot more fun. For instance, the My Numbers feature shows the number a player needs to win together with possible payouts while Easy Mode lets punters play with a smaller betting grid where only the easiest-to-understand bet spots are available.