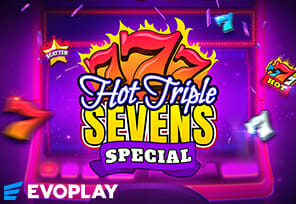 Game development company, Evoplay is excited to announce the introduction of the highly anticipated title, Hot Triple Sevens Special. This game is inspired by classic fruit-style slots available in Las Vegas. It features wild animations, a mesmerizing soundtrack, and treasures.

As part of the initial game, hitting three Scatters in the identical round would activate 10 Bonus Spins, but the latest edition of the slot allows players to claim 10, 15, or 20 Bonus Spins as well as the maximum reward of x7500 the bet, which is 2x the award from Hot Triple Sevens.

777 symbols replace all typical elements in winning combinations, and a winning combo of three 777 elements rewards users with an x500 multiplier. Sevens on Fire symbols will also replace low Sevens in the identical color as the combinations, activating more wins.

“Featuring the innovative technology that our games are known for; this remake will provide players with an experience that restores life to an aging staple of our collection.”

Evoplay has recently added another game to its extensive portfolio. The company has unveiled the new installment from the Fruit Super Nova games catalog, with more paylines, Fruit Super Nova 100. It comes with a 5×4 layout and 100 paylines, as well as the highest win potential, compared to others games from the same collection.

More About the Gaming Company

Evoplay is a leading gaming provider that uses immersive gameplay, a mobile-first approach, and innovative design to enhance user experience and bring new people to the world of iGaming.

The company has already received several EGR and SBC awards for its excellent performance. It also added the first 3D/VR slots at ICE 2018 and now has a portfolio of more than 100 slots, tables, and instant titles. With its development hub and offices in Europe, the enterprise has an established network across Asia, the CIS, Latin America, and Europe.