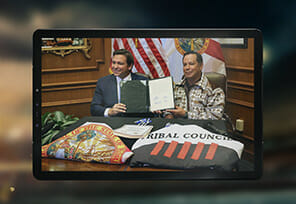 A judge at federal district court has dismissed the Seminole Tribe of Florida’s request to prolong the ruling refuting the tribe’s online sports betting activity. It means that games will stay in legal limbo during the holiday weekend.

According to the opinion of Judge Dabney L. Friedrich from the U.S. Court in the District of Columbia, the tribe has not demonstrated that it will be injured if it is not permitted to keep taking wagers during the appeal process. The judge also ruled that the gaming compact secured between Gov. Ron DeSantis and the Seminole Tribe breached federal Indian gaming law.

Despite declaring sports betting to be unlawful, the tribe continued to operate the online betting app during the week.

Friedrich further noted that because the compact allows online sports betting outside of Indian lands, and because the law requires that gambling occurs only on tribal land, this compact should never have been authorized by U.S. Secretary of the Interior Deb Haaland.

More About the Compact

Based on the agreement or compact, the tribe accepted to pay the state a min of $2.5 billion over the initial five years in exchange for getting control over sports betting in the entire state and getting permission to include roulette and craps to its casino offer. To get around a law that bans any extension of gambling without the approval of voters unless it is accepted as tribal gaming, the governor and tribe reached a deal to provide the tribe a monopoly on web sports betting in Florida by having all wagers going through the tribe’s servers. However, the court declared that the provision breached federal Indian gaming law.

Later on, the Tribe filed a notice of appeal as well as a “motion for stay pending appeal,” that would enable it to continue operating a native gambling app during the appeal process.

However, this request has been rejected as the tribe could not show that it was “irreparably injured” without a stay. The judge added:

“Although the tribe invokes an interest in preserving the status quo …. online gaming under the compact began only on November 1, 2021, and the tribe previously represented that it would not begin until November 15.