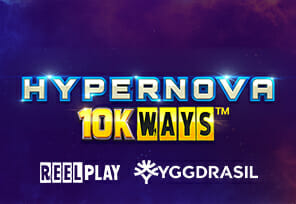 Yggdrasil and ReelPlay have joined together to create the new Hypernova 10K Ways slot title. Decorated with beautiful colors, the background of this slot will awake creativity in you. A grid of 6 reels and 4 rows bordered by neon blue will appear between the celestial bodies and the stars. On it, we will find low-paying symbols that are card-themed – 9, 10, J, Q, K and A. On the other hand, high-paying ones are gems in blue, green, red, and white, and they will bring you a little more profit.

Although at first glance it may seem like a megaways title, it is not. This release has 10,000 ways to win including a jackpot that can increase your stake by 5660X.

Return to Player is 96.20%, and the frequency of winnings is regulated with medium-high volatility.

This Game is Special and Irresistible! Wondering Why?

What makes this game special are the features – Cascading symbols, a Wild, and Bonus Respins.

The Wild symbol will only appear at the top of the reels, and replace any symbol except the scatter.

If 6 or more scatter symbols appear, you will be rewarded with the Bonus Respins feature. During the next spin, all scatters will remain in place. If another one appears, you will get 3 respins and it will restart with each new one.

Your bet level depends only on your choice within the limits set by the provider. This time company determined that the minimum bet is 0.20 coins, which will make new punters happy, and for a little more experienced provider prepared something a little higher – max bet of 40 coins.

After several hits that this provider recently released such as Savanna Roar, Tiger Tiger, Gems Infinity Reels, Hunters Moon GigaBlox, we expect success from this title as well.

However, Yggdrasil doesn’t plan to stop here. The company announced new games on their site such as Golden Fish Tank 2 Gigablox, 28 October, but with 90K Yeti Gigablox, Glory of Heroes, Serendipity, Lady Merlin

Lightning Chase, 5 Clans: The Final Battle and many others we will meet in November.

”Yggdrasil lights up the stars with ReelPlay in Hypernova 10K Ways

The post Explore the Universe Through a New Online Title from Yggdrasil – Hypernova 10K Ways first appeared on RealMoneyAction.com.