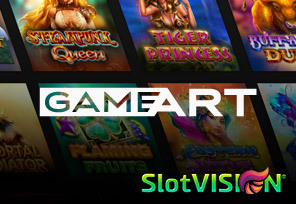 GameArt, a Malta-based software developer widely renowned for its world-class online slots with state-of-the-art graphics, has announced the acquisition of SlotVision, a forward-thinking European studio and a creator of such player favorites as Wall Street Tycoon, Platinum Heart, and Secret Temple.

As a result of the freshly penned deal, players will be able to enjoy the brand new SlotVision powered by GameArt series of games planned to be released during this year. Some of the engaging titles fans of virtual fruit machines can look forward to are Flaming Fruits, Buffalos Duel, as well as 7s And Diamonds.

GameArt, a top-tier developer of online slots who at the end of 2020 joined the rapidly growing YG Masters program to build innovative games and distribute them globally, has further strengthened its position in the industry thanks to the acquisition of SlotVision.

The company has ambitious plans, plotting the launch of the SlotVision powered by GameArt slot series to offer players an even more thrilling experience. The first title to debut as part of the brand new range is 5-line Flaming Fruit set for release on May 24. Other spinning adventures to soon hit the virtual floors of online casinos are Buffalos Duel and sparkling 7s And Diamonds.

“GameArt is growing at an exponential rate. We have acquired SlotVision because their content has great potential and ties in with our current position and efforts to enter new markets. The technology that SlotVision uses in its games tallies with our products and clients’ needs, and we are confident that our ‘SlotVision powered by GameArt’ slots will be well received by players.”

Both GameArt and SlotVision boast highly experienced teams of talented designers and developers while their games have always amazed with captivating graphics and compelling reel mechanics. No doubt, when the two teams join forces to create a new product, players can expect nothing but a ripper of an online slot.

As for Flaming Fruits, the first title in the SlotVision powered by GameArt series, it is a low volatility game based on a standard 5×3 grid enhanced with 5 pay lines. Fans of classic stories are going to love the juicy extravaganza and the way fruits burst into flames to celebrate every win.

The game contains a wild symbol represented by a four-leaf clover. It appears on reels 2, 3, and 4 to expand and cover the entire reel, replacing as many regular icons as possible. The Dollar and Star symbols are scatters, and bring payouts regardless of the pay lines. Flaming Fruits will be available at online casinos from May 24.