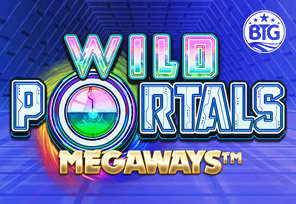 mechanic with the Win Exchange

and takes players on a one-of-its-kind journey to the Sci-Fi world of massive wins and free spins.

Another Dimension of Massive Wins

Australian-based Big Time Gaming does not cease to surprise players, replenishing its slot portfolio with new exciting games jam-packed with innovative features. In April, it was Star Clusters Megapays

boosted by four progressive jackpots while just a week ago, a unique fishing adventure Golden Catch made its global debut.

…is an immersive 6-reel slot driven by a state-of-the-art Megaways engine to the accompaniment of a hard-house soundtrack. Described by the creators as “a Wild door that is the portal to another dimension of massive wins and free spins”, this game does offer an impressive maximum win of 29,580x bet or $591,600 for the max stake of $20.

The RTP of this slot is above average and set at 96.58% whilst the 6-reel playfield can feature between 2 and 7 rows, generating up to 117,649 ways to win. In the paytable, Wild Portal is a 2×2 wild symbol that may appear on reels 2, 3, 4, and 5 to deliver out-of-this-world multipliers and produce truly staggering wins.

According to the vast majority of players, online slots are not fun without the free spins feature. Well, people from BTG know how to make a thriller – in Wild Portals, landing at least three scatter symbols triggers 8 free spins, plus, 2 additional spins are awarded for every extra scatter in view.

The cool thing is…

…during the feature, the Wild Portal is guaranteed to appear in every bonus round, retaining its multiplier during the spins. What’s more, treats on the house can be retriggered, again, by landing at least three scatters. In case the feature is awarded from Win Exchange, it always commences with a multiplier of 1x.

After Gold Megaways, Apollo Pays, and Golden Catch released earlier in May, Wild Portals is the fourth title enhanced with the Win Exchange feature. Instead of waiting for free spins to be triggered, players can try their luck and exchange their wins for a chance to trigger the sought-after bonus.

The post Step Into A Futuristic World Of Wins With BTG’s Wild Portals Megaways™ first appeared on RealMoneyAction.com.