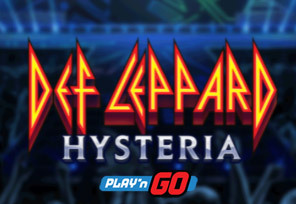 Lovers of rock music and the energy it brings with it, get ready for an unforgettable experience! Play’n GO, one of the most famous casino software developers in the iGaming industry, takes you to a concert by a popular English rock band in its latest online slot – Def Leppard: Hysteria!

The grid of this fantastic adventure is located in front of a large stage. It consists of 5 reels, 7 rows, and cluster pay mechanics. To create a winning combo, you must combine at least 5 symbols into a cluster. During this high volatility game, you will enjoy a superb performance of some of the most famous songs, and the concert brings you the opportunity to win up to x10,000 the bet!

The theoretical Return to Player is higher than average and is 96.27.

Def Leppard will feature low-paying symbols made up of card-themed symbols including clubs, diamonds, hearts, spades, and stars. However, the grid will be enriched with high-paying ones presented as face warp, guitar, leopard, and rocket, as well as a Wild.

Cascade Feature – Each time you create a winning combination, the symbols that participated in it will disappear from the grid, and a new one will come down from the top, allowing you to create new winning combos.

Also, you will be able to take advantage of the Wild symbol which will replace all other symbols during the game.

The Break It Up feature will be activated at random when you do not create a winning combination. Then the symbols that are in view will be mixed, and players will be rewarded with 3 to 6 Wild symbols.

Fire Me Up … sounds familiar? This world hit has been turned into an amazing feature that will see a randomly selected symbol before each spin. If a particular symbol participates in a winning combination, it will fill up a meter that will reward you with 3 to 6 Wilds when filled.

However, this is Not All!

In addition to the above, the atmosphere in this developer’s online slot will be warmed by two other fantastic features that also carry the names of popular songs including Pour Some Sugar On Me Free Spins as well as Sugar Me Sweet.

Head of Games, Charlotte Miliziano, Play’n GO said: “Our collaborations with iconic artists such as Def Leppard continue to prove popular with players everywhere – and their amazing fun to work on too. Not only is this great for music and slot fans alike, but it gives us amazing inspiration on how we can push our features further. Like the Pour Some Sugar on Me feature, it’s all about visuals, clear goals, and most of all, entertainment.”

If you liked this title, you would surely enjoy the recently released Tales of Asgard: Freya’s Wedding!

The post Get an Unforgettable Rock Experience with Play’n GO and Its Def Leppard: Hysteria first appeared on RealMoneyAction.com.