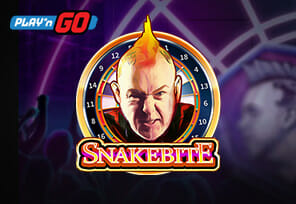 Peter Wright is a world darts champion known for his unusual hairstyle that he changes for every tournament. He was born in 1970 and was nicknamed “Snakebite” due to his love for these cold-blooded animals.

This very famous world champion will take us on an unforgettable journey with his darts board, and if you shoot straight to the center with your spins, you have the possibility to win big!

Where Peter Wright is, There’s Snakebite!

Players will be accommodated in the huge arena at the tournament, and the atmosphere consists of an audience cheering accompanied by energetic music.

With beautiful graphics, the center of events will be a grid composed of 5 reels and 3 rows, while during the game, the number of rows can be expanded to 5 as well. Play’n GO gives you a better chance of winning!

10 paylines will be illuminated with light effects, and with a little luck, you can win up to 6000x your stake. Keep your hand still because this time we are shooting straight into the center!

The game’s medium-volatility is followed by a theoretical Return to Player of 96.20%.

The symbols on the grid are 10, J, Q, K, and A which are low-paying symbols while high-paying ones are represented by the protagonist of this online slot in several colors – purple, green, and red.

The Wild symbol substitutes for other symbols to help us get a winning combination. It will do that job in this title as well with a few exceptions. The Wild symbol will not be able to replace special symbols.

The Dartboards can appear on reels 1, 2, 3, and 4 while the famous Peter ‘Snakebite’ Wright symbol can only land on reel number 5.

The Snake Spin feature will be acquired if two Dartboard symbols and the logo symbol (aka Wright himself). Then the grid will expand to 5 reels and 5 rows where 3 free spins will be waiting for you. If Snap Snake lands on the board, it will activate the Snap Snake feature and will duplicate all prizes.

Head of Games Charlotte Miliziano said: ”We’re excited to expand our IP portfolio into the world of sports stars. We didn’t just want this to be a game; we wanted this to be an event. Peter’ Snakebite’ Wright is renowned for his personality, and in darts, he has a huge following, so we wanted to do that justice.”

Quick reminds from our side… this is just one in a series of releases prepared by Play’n GO. We recently had the opportunity to enjoy three new games Sparky & Shortz, Alice Cooper and the Tome of Madness, and Muerto en Mictlán that came out this month, and many more are expected in the coming period.

The post Get Help from Peter Wright for Big Wins in Snakebite – a New Release from Play’n GO! first appeared on RealMoneyAction.com.