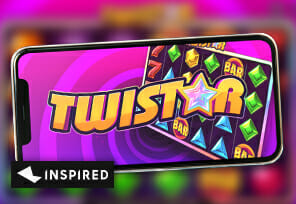 Inspired Entertainment has officially announced the launch of its newest slot title, Twistar. The richness of this title is a country full of precious stones and valuable prizes that will bring a smile to your face. The story begins at the point of illusion where the grid is lit up with jewels.

The graphics are colorful and illuminated with shades of pink, complemented by low-paying symbols in the form of gems and high-paying symbols that are Lucky Sevens and BARs.

In addition to gems, the game will be decorated with 40 paylines on a grid divided into 6 reels and 4 rows. Glamorous! What players are most interested in is their money which, depending on their availability, can be invested in a minimum bet of 0.20 coins to a maximum bet of 20 coins per spin.

Special Features, Re-spin, and Many Other Benefits Await You!

On reels 2, 3, 4, and 5, we can find Mystery Symbols which are divided into 6 parts, and in each appearance, one segment is illuminated. If all 6 segments are lit, all Mystery symbols will automatically convert to one of the symbols excluding wild.

One of the most important features of the game is wild, which will create wild stacks and allow the player to spin again. During re-spins, the wild will switch to the opposite reel and it will become sticky. ”Sticky” means that it will stay in place during next re-spins as well. Re-spins are limited to nine per game.

Claire Osborne, Vice President of Interactive at Inspired, said: “Twistar brings players surprises, mystery symbols, expanding Wilds, gems and stars – all with the added Inspired ‘twist.’ Its innovative game mechanics coupled with its bright, captivating graphic design make for an engaging and highly entertaining player experience that will appeal to casual players. We’re thrilled to be adding yet another winning slot to our ever-growing portfolio of premium slot titles.”

This online gem-themed slot will relax you with music added in the background and reminds you of the songs that you can often find in a beach bar of some exotic destination.

This provider was aware of today’s modern trends so it allowed its players to run this game both online and via mobile devices.

Every day, Inspired, which recently agreed a deal with Playtech, expands its product library. In addition to online games, it has over 50,000 gaming machines located in various bookmakers and casinos around the world. Besides its latest online slot, it also boasts other popular ones such as Reel Spooky King Megaways

, Top ‘O’ the Bonus and Scroll of Egypt which is a twin pays online slot.