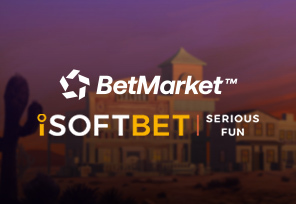 iSoftBet, one of the industry-leading and most recognizable casino software suppliers known for its engaging and ever-growing portfolio, continues to expand its global reach by partnering with BetMarket!

But let’s first recall one of the recently concluded deals! Namely, the company joined forces with another well-established operator, Winner, a few weeks ago and on that occasion brought its library of titles to Romania!

Following Romania, iSoftBet stepped into another Balkan country, Bulgaria, delivering its portfolio to this market!

The developer shook hands with BetMarket, one of the leading operators in the region, and the new deal between these two giants will see the developer’s portfolio being licensed on the new partner’s platform!

The distribution will include a wide range of impressive and sought-after online casino releases that are proven to be the industry-leading ones, and players from Bulgaria will be able to take advantage of big wins and engaging features!

Federica Faggiano, Chief Commercial Officer at iSoftBet, said:“We’re proud that our offering brings proven, exciting games to players and are delighted to be chosen to play a leading role in the development of BetMarket’s recently introduced Bulgarian casino. Our expansion in this part of Europe has been a real highlight for this year, and we’re very happy with another strong partnership.”

Valentin Bojilov, Chief Executive Officer at BetMarket, said: “iSoftBet brings a strong array of content to the table, and we’re very pleased with what we can offer players as we recently launched our online offering in Bulgaria. Our success is founded on close collaborations, and we believe this can be another great relationship for us.”

Collaborations in the Past

This fantastic deal is just one more in a series of amazing ones that the company concluded during the year.

We would like to be able to mention all of them, but since that is not possible, we bring one of the most recent ones.

In mid-November, iSoftBet joined forces with Platincasino, thanks to whom the developer left its footprint in Spain and offered players from this market its fantastic games.