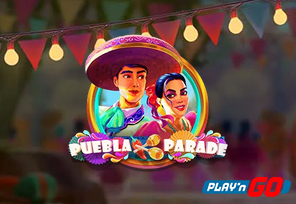 Play’n GO has announced the launch of Puebla Parade, a Mexican-themed online slot that conjures up the unique atmosphere of the country’s greatest celebration. Apart from intuitive reel mechanics and a stunning set of bonus features, players will be able to enjoy beautiful music recorded by a Mexican Mariachi singer specifically for this project. This game uses connecting pay lines to deliver prizes of up to 5,000x bet.

Join the Parade of Sticky Wilds and Re-spins

For Play’n GO, April has been a very eventful month marked by the company’s entering the North American market and three new slots. The latest game to hit the vast virtual floors of online casinos is Puebla Parade, an incendiary tribute to Cinco de Mayo or the 5th of May – a holiday that celebrates the date of the Mexican army’s victory over France at the famous Battle of Puebla that took place during the Franco-Mexican War in 1862.

…with their hypnotizing Salsa steps is in charge of triggering re-spins and pairing up to extend the reels and award a 2x multiplier. Both Senorita and Senor are wilds that aside from substituting for all other regular symbols, become sticky and even can walk during re-spins and Bailar free spins!

No doubt, players are going to love the way the Dancer Wilds merge on the screen to produce multipliers for even bigger wins, at the same time increasing the 5×4 dance floor to make room for more winning combinations. In the own words of the Play’n GO team, it “has struck the balance between being creative with the features without pulling the player out of the gameplay”.

Indeed, slot enthusiasts have plenty to look forward to in this 5-reel title enhanced with connecting pay lines, where wins are awarded for hitting between 3 and 5 matching symbols on a continuous pay line, starting with the leftmost reel. Punters can win up to a 5,000x bet, which can be a hefty sum to pocket, given the maximum stake of $100.

Play’n GO is widely known as a creator of universal players’ favorites such as Book of Dead, Reactoonz, and many others. Similarly, the recently released Forge of Gems, Moon Princess 100, and other novelties are on their way to win the hearts of thousands of slot buffs and top the charts. What is the brand’s secret to success?

“One of the reasons that our portfolio is the most diverse in the industry are the themes, celebrations, and culture we include in our games. We’re a community at Play’n GO and our games are a positive reflection of that.

‘We’re dedicated to going the extra mile, you won’t find the Free Spins music in a sample library for instance. Everything from the lyrics to the music was devised and performed just for this game.”