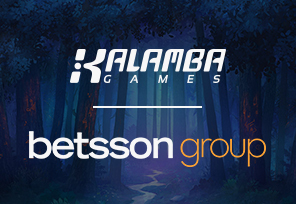 Kalamba Games has joined forces with one of the globally best operators in the iGaming industry, Betsson Group, to launch its wide and top-tier portfolio even further across the globe.

The contract signed by the two iGaming giants specifies that Kalamba will launch its engaging and innovative online casino releases on Betsson’s brand platforms.

If you decide to check out one of over 20 online casino platforms where these titles will be available, you will have the opportunity to explore several of Kalamba’s fantastic titles and thus get an unforgettable iGaming experience.]!

The distribution will include Blazing Bull and Ducks ‘Til Dawn as well as the recently launched Legend of Senteng, and Super-Size Atlas.

In addition to launching online slots, the developer is also focused on developing its own RGS, Bullseye, analytics platform, Stargazer, and various promotional tools.

The partnership is one of the key ones for the supplier if we take into consideration that Betsson, which recently teamed up with BF Games, is present in more than 19 jurisdictions thanks to its licenses.

This latest move is a major milestone for both brands.

Andrew Crosby, Chief Commercial Officer at Kalamba Games, commented: “Having our titles in the casino lobbies of an operator like the Betsson Group is a definite milestone for Kalamba Games. Its reach and reputation are second to none and direct integration is a mark of how far we’ve come as a developer. We’re looking forward to providing its players with the quality games we’ve become known for and we can’t wait to get started.”

Karl Schranz, Acting Commercial Director – Gaming at Betsson Group, added: “We have worked with Kalamba for a number of years via Relax Gaming but it is great to now expand this partnership and to be taking a selection of its slots into game lobbies across our roster of brands.”

As we have already mentioned, Kalamba has recently taken another key step that will definitely improve the developer’s portfolio. Namely, this popular supplier has shaken hands with Big Time Gaming. The new deal will see the inclusion of partner’s Megaways system in the provider’s library of products.