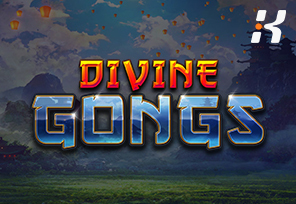 Kalamba Games is excited to present its newest online slot that will start a series of successes this year – Divine Gongs!

The developer recently debuted the exciting adventure called, Phat Cats Megaways, where you could meet big prizes and many other benefits.

The game will be played on a grid that features 5 reels, 3 rows as well as 20 paylines!

The title guarantees you an unforgettable iGaming experience, numerous engaging features, well-designed and beautiful symbols as well as nice wins!

In this fantastic adventure, players will encounter low-paying card-themed symbols as well as 4 Asian-themed items.

Among the more prominent features, we will single out the Wild, which will help players create more winning combinations. Namely, this symbol will replace all symbols except the K-CASH symbol during the game.

To trigger K-Cash spins, at least 3 K-CASH symbols must come into view. Players will initially be greeted with 3 K-CASH spins.

Every time a new K-CASH symbol lands on the grid, the number of spins will reset to 3.

Players can take advantage of three different K-CASH symbols. Depending on whether the feature is triggered with a pink, green or red symbol, players will be able to benefit from UP ONE, DUO REELS, as well as PRIZE BOOSTER features.

The Return to Player is variable and has different values depending on the circumstances.

Namely, in the base game, the RTP is higher than the average and amounts to 96.39%.

However, if you choose one of the offered Bonus Buy options, the RTP will be as follows:

Alex Cohen, COO, and Co-Founder at Kalamba Games said:“We wanted to start this year with a bang, or rather a gong in this case, to showcase our wider plans for 2023. Divine Gongs perfectly encapsulates this ambition delivering numerous different features, a bonus round which is improved through base game play all interestingly juxtaposed against a zen-like location. With big wins and entertainment at its heart, we look forward to seeing players’ reception to this Asian-inspired release.”

“Kalamba Games rings in the Year of the Rabbit with Divine Gongs’’, europeangaming.eu, January 5, 2023.