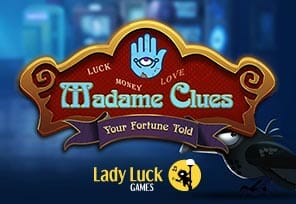 Casino software developer from Sweden, Lady Luck Games, presents its latest online release in which a fortune teller will use her lamp to predict your destiny!

The grid is housed in an abandoned, darkened building. In fact, the grid is a sphere of destiny. It consists of 1 reel and 1 row. In this medium-high online game, destiny can bring you winnings from up to x23,040 the bet! Great, isn’t it?

The theoretical Return to Player is slightly lower than average and is 95.9%.

During the game, you will encounter symbols such as black raven, beautiful owl, hand, goblet, sword, coin, and skull. All symbols will bring you some reward except a skull that pays nothing.

One Reel and Many Features!

If a Raven symbol appears in the ball, it will activate the Look Deeper Bonus. Then the grid will expand to 2 reels and 2 rows and will contain 4 symbols. The new Raven symbol will split the symbols once again, and the maximum grid extension is 8 reels and 8 rows (64 symbols). In this online slot, there are no paylines but each symbol will pay its value. During this feature, the Owl symbol will not appear.

Unfortunately, the Death symbol has no value, nor does it trigger a feature.

Comments Coming from Each Side

Mads Jørgensen, Co-Founder and Chief Executive Officer of LL Lucky Games AB said: “We’re thrilled to kick-start 2022 with such an innovative slot release, a lot of time went into developing this and we’re confident we have something truly special on our hands. We’re developing games with the new generation of online slot player in mind, and this title gives them something that’s unlike anything they’ll have ever played before. Now it’s down to them to step up to the crystal ball, take their chances and reveal their fate.”

“Step right up and reveal your fate in the one-reel slot Madame Clues’’, ladyluckgames.io, January 11, 2022.