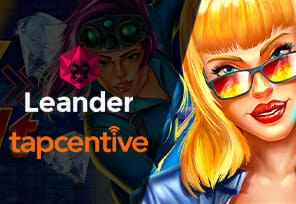 The new gaming concept enables customers to gamble when and where they want without using expensive remote servers and wireless infrastructure. The Tapcentive tablet provides an increased level of security and trust at a competitive price point.

Based on the new agreement, Tapcentive will have the possibility to benefit from titles such as Ave Caesar, Savage Shark, and Viking Raid Zone. The latter title is known for a well-concept ‘Dynamic Ways’, along with the latest release from the company, Sky Vault.

“Leander Games are internationally recognized as a provider of cutting-edge games that keep players entertained and engaged. They are also a technology leader in game and gaming system design.”

According to the CEO, a new partnership will allow the company to adapt the games to the tablet platform and form a foundation to continue adding new games that suits the needs of global operators.

“When Tapcentive approached us with their new multi-game EGM tablet platform, we knew immediately that we wanted our content to be offered on it”.

More Words on the Brand

Leander is an established games development studio with a significant presence in the market. Its portfolio is already localized for 31 locations and certified for leading markets. Leander creates top-performing video slots, with innovative concepts and valuable features, unique art, and math models.

“From Ship To Shore – Leander Games Teams Up With Tapcentive”, leandergames.com, July 12, 2021.